STLFC Comes Back to Win 2-1 Over Indy Eleven

Indy Eleven scored the opening goal in the 61st minute from a corner kick that was put away by Neveal Hackshaw following a penalty save from STLFC goalkeeper Jake Fenlason. The home side would storm back in the 69th minute with an equalizer scored by Phanuel Kavita on his birthday and then Russell Cicerone bundled home the winner in the 77th minute to earn all three points and the first win in a season opener game in STLFC club history.

The first half saw Saint Louis FC on the front foot in a frenetic start and the home side nearly opened the scoring in the 1st minute as Lewis Hilton found Sam Fink at the back post with a corner kick but his header was cleared off the goal line.  Hilton then had an effort from distance saved by Indy Eleven goalkeeper Evan Newton in the 5th minute.  Indy would respond with a corner kick in the 35th minute that found the head of Kenny Walker but went wide to see the first half finish level at 0-0.

The second half saw Indy almost open the scoring in the 48th minute as Dane Kelly hit the post with a header following a cross from Josh Penn.  Cicerone then had a nice solo run that cut inside the defense but he was put off balance and had his shot go narrowly wide in the 53rd minute. The game turned on its head in the 60th minute as a penalty was called and Kelly stepped up to convert but was denied by a great save by Fenlason.  The ensuing corner kick was taken by Walker and turned in by Hackshaw in the 61st minute to take the lead.  Kavita would soon score the leveler in the 69th minute as the ball was bouncing in the area following a corner kick and he smashed it with his left foot to find the top corner.  Cicerone would score the winner from similar circumstances as the ball was bouncing in the area following some scrappy work from Kyle Greig and Caleb Calvert and he would turn the ball over the line in the 77th minute.  Indy had a few chances from set pieces to equalize at the end but the game would finish 2-1 in favor of the home side.

“I think we showed as a group what we’re all about—togetherness, spirit, character—so early in the season to come from behind and go on to win the game,” said STLFC Head Coach Anthony Pulis. “I thought the result was probably better than the performance.  It was a scrappy performance but I’m really proud of the players for what they showed to dig deep and to find a way to come back and win the game was magnificent.” 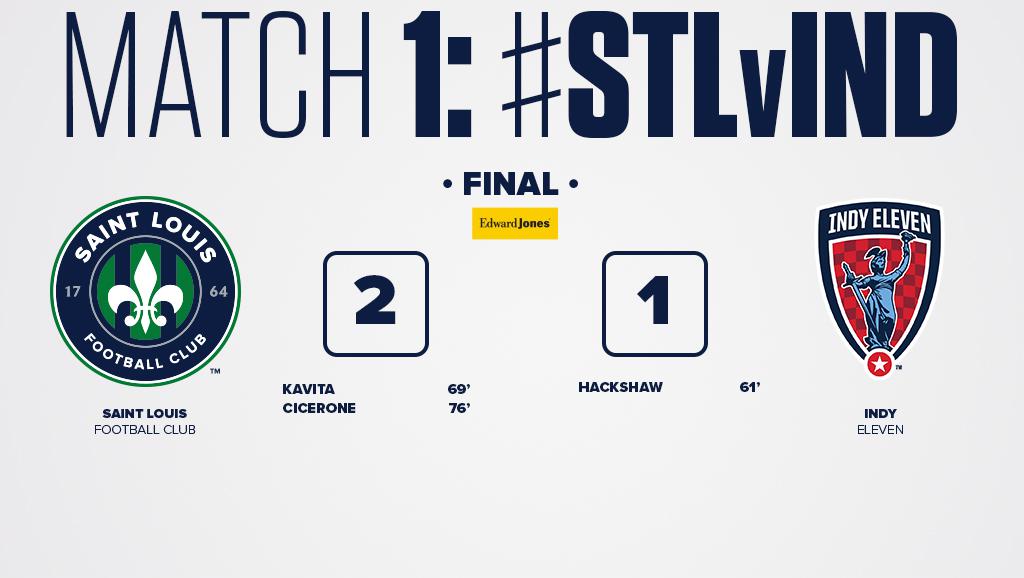