Saint Louis FC opened the scoring in the 26th minute through captain Sam Fink who got on the end of a corner kick from Lewis Hilton for his first goal of the season.  Tampa Bay would equalize from the penalty spot in the 76th minute as Sebastian Guenzatti placed his kick beyond STLFC goalkeeper Jake Fenlason to see both sides finish level and the result puts Saint Louis FC at 2-0-1 on the season with 7 points while Tampa Bay also sits at 2-0-1 with 7 points in the USL Championship Eastern Conference.

The first half saw Saint Louis FC create a number of chances and Caleb Calvert nearly opened the scoring in the 6th minute as he received the ball on the end line after a good run from Bradley Kamdem Fewo and hit the post trying to curl the ball past Tampa Bay goalkeeper John McCarthy.  Kadeem Dacres then had a chance in the 12th minute as he cut inside from the right but his left-footed shot went wide of the near post.  The home side would break the deadlock in the 26th minute as Hilton found Fink from the corner kick and the defender just got enough on it to open the scoring.  Tampa Bay would then almost equalize in the 32nd minute as Leo Fernandes was found at the back post but his header was well-saved by Fenlason.  The away side continued to press and nearly scored in the 39th minute as Brandon Allen was found at the back post but he put the first-time effort just wide of the post and Dominic Oduro also had his shot saved from distance by Fenlason to see Saint Louis FC maintain the 1-0 lead going into halftime.

The second half saw Tampa Bay nearly equalize in the 47th minute as Caleb Richards was played behind the defense and Fenlason came out strong to deny his shot from close-range. The away side would then get their equalizer in the 76th minute as Fink was called for a handball in the box and Guenzatti stepped up to score his third goal of the season.  Saint Louis FC had a couple chances at the end of the game to score the winner in stoppage time as Paris Gee won a slide tackle to disrupt a Tampa counterattack and his cross found Albert Dikwa at the back post but his header hit the side netting.  The home side then almost scored from the final kick of the game as Hilton’s corner found Fink on the penalty spot but his header was saved by McCarthy to see the game finish at 1-1.

“The game with chippy, scrappy and really stop-start and I don’t remember a game that had so many fouls to be honest,” said STLFC Head Coach Anthony Pulis. “Credit to Tampa, obviously they came here with a plan to make it difficult as they are big, strong, and physical and we knew coming into the game that we would have to stand up to them.  We knew it wasn’t going to a pretty game with free-flowing football on both ends, but it’s disappointing when you are 1-0 up at home and you throw away a lead like that.” 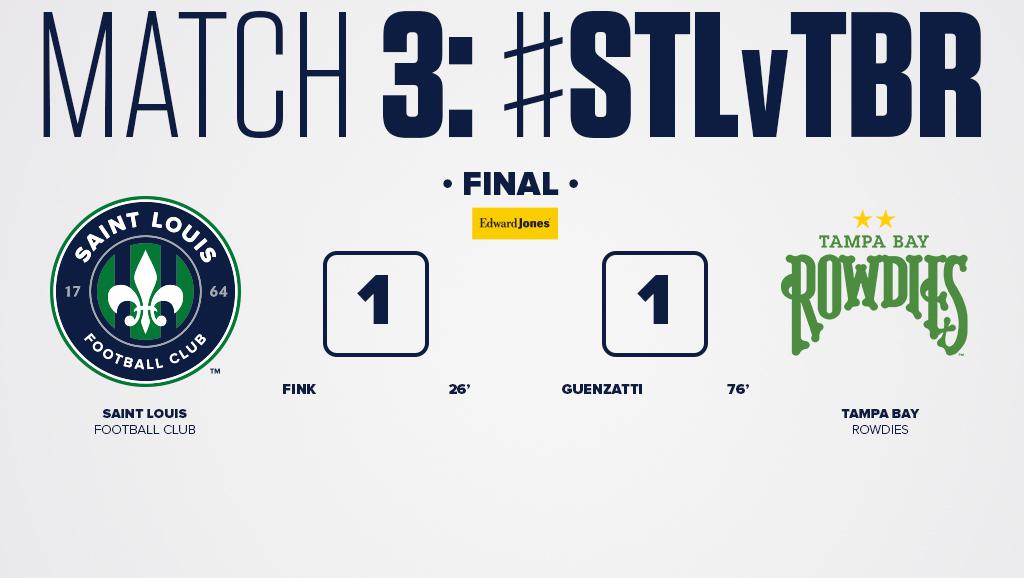