The draw sees Saint Louis FC pick up a point on the road to improve to 4-1-2 with 14 points while Pittsburgh Riverhounds SC moves to 2-1-3 with 9 points in the USL Championship Eastern Conference.  Saint Louis FC is back at home next weekend as they face cross-state rivals Swope Park Rangers on Saturday, April 27th at 7:30 p.m. CT.

The first half started after an hour rain delay and the wet conditions played their part as both teams struggled to create chances.  The first opportunity arrived in the 19th minute as Matt Bahner picked out Kyle Greig with a cross but he could not control the pass and it was collected by Pittsburgh goalkeeper Ben Lundgaard.  Pittsburgh would threaten towards the end of the half with a few dangerous crosses but STLFC goalkeeper Jake Fenlason was there to preserve his fourth clean sheet of the season.  The final chance of the half fell to Joaquin Rivas as he ripped a shot from outside the box that was destined for the bottom corner but it was palmed away by Lundgaard to see the teams level at the break.

The second half saw the conditions improve as did the play on the field with STLFC creating a dangerous chance from a Lewis Hilton free kick that was cleared for a corner in the 51st minute.  Kadeem Dacres then had a chance as he was played behind the defense in the 60th minute but his shot went narrowly wide.  Former STLFC player Christian Volesky was substituted on in the 71st minute and he nearly scored the opener with an acrobatic back-heel attempt in the 88th minute but it went wide of the far post.  Saint Louis FC looked the most likely to steal all three points and they almost did in the 89th minute as substitute Albert Dikwa crossed the ball into the box and it found itself to Greig who swiped his shot wide of the near post to see the game finish 0-0.

“I thought it was a well-deserved point in really tough weather conditions,” said STLFC Head Coach Anthony Pulis. “The guys worked extremely hard and did the basic fundamentals of defending well to earn another clean sheet. On another night, we could’ve taken all three points if we’d been a little more composed with a couple of good opportunities we created in the second half. Now we’ll get back to work and make sure we prepare well for a big game against Swope Park Rangers next week.” 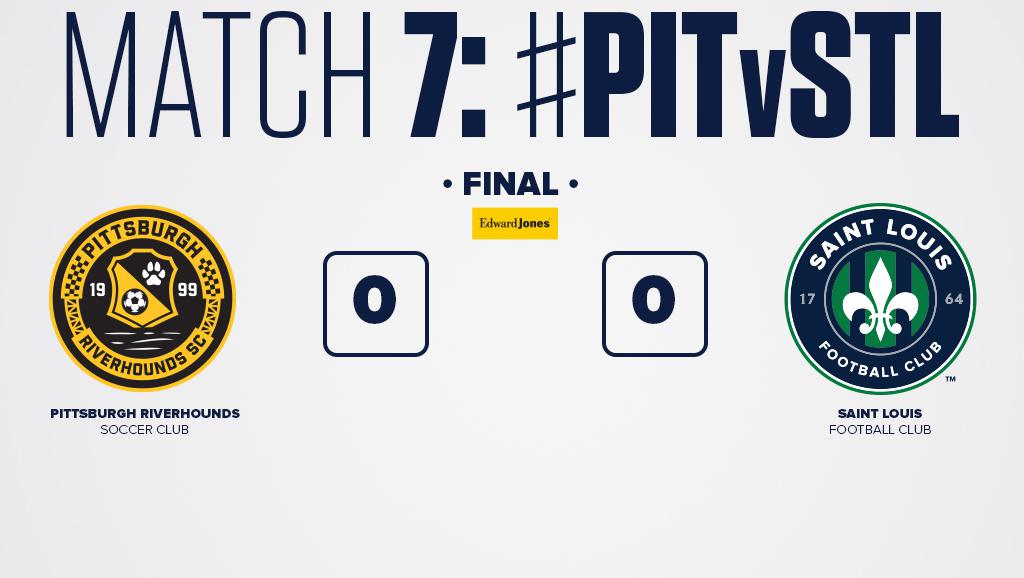