Saint Louis FC opened the scoring in the 42nd minute with a missile from outside the box from Audi Jepson who was starting his first game of the season.  The home side would then double their advantage soon after the halftime break as Russell Cicerone converted his own rebound in the 47th minute before Swope Park pegged one back in the 66th minute through Alexsander. Saint Louis FC would seal all three points with a set-piece goal from Kyle Greig in the 84th minute to improve to 5-1-2 with 17 points while Swope Park Rangers falls to 0-4-2 with 2 points in the USL Championship Eastern Conference.

The first half saw Saint Louis FC control most of the possession and create a majority of the chances with the first arriving in the 15th minute as Greig was picked out with a cross from Sean Reynolds but his shot was saved by Swope Park Rangers goalkeeper Adrian Zendejas.  The next opportunity came to Russell Cicerone in the 21st minute as he cut inside the defense and curled the ball to the far post but it was palmed away by Zendejas.  The opener would come just before halftime, however, as Cicerone laid the ball off to Jepson and he hit a rocket that bounced down off the crossbar for his first professional goal in the 42th minute to take a 1-0 lead into the break.

The second half saw Saint Louis FC pick up right where they left off as Cicerone was played behind the defense by Albert Dikwa and his first shot was saved but he pounced on the rebound for his third goal of the season in the 47th minute.  Swope Park would come back into the game with a goal in the 66th minute as Alexsander curled his effort into the bottom corner before STLFC goalkeeper Jake Fenlason was called to make a save in the 72nd minute on a dipping shot from outside the box.  The comeback effort would come up short as the home side secured the win with a third goal in the 84th minute as Sam Fink headed the ball back for Greig to score his second goal of the season.

“I think it was a little bit back and forth tonight and we created two or three really good opportunities but didn’t take them and you kind of worry it’s going to be one of those nights,” said Head Coach Anthony Pulis. “Thankfully we got one before halftime and regrouped and, barring the 20 minutes or so after they scored, I think we played really well tonight and it was a positive performance.  Credit to Swope Park Rangers, they are a young, talented team and gave us trouble and I would have liked another shut-out to be honest, but I’m pleased with the performance and the good result.” 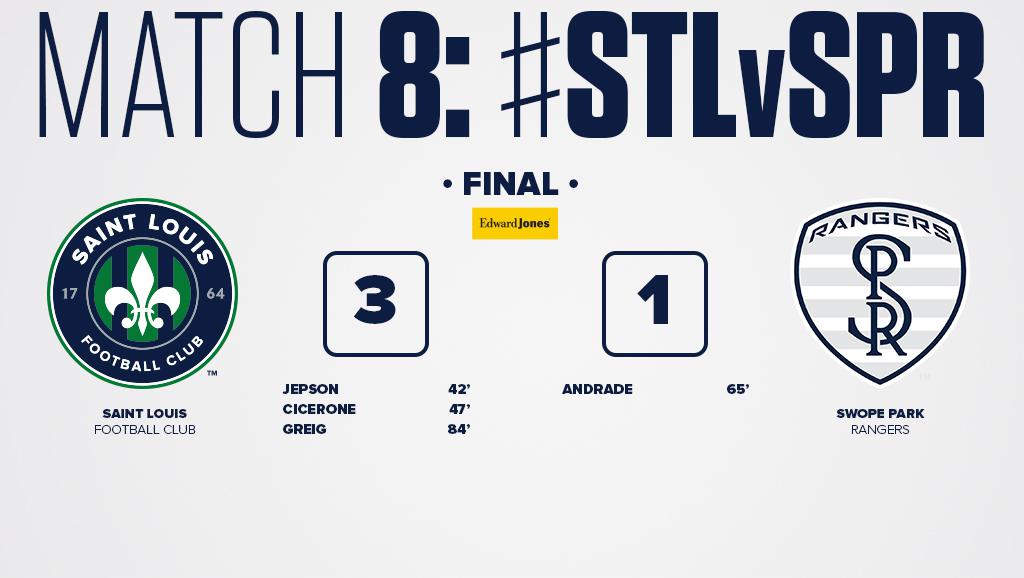