Both sides created quality chances in either half but neither could convert and Saint Louis FC earned their sixth clean sheet of the season and third successive 0-0 draw on the road as the team improves to 5-1-4 with 19 points in the USL Eastern Conference.

The first half saw Saint Louis FC create a majority of their chances from set pieces and on the counter while Louisville looked to establish possession in the final third with both defenses having strong performances. The first chance for the away side came in the 4th minute as Lewis Hilton whipped a free kick across the box but it missed Guy Abend running in at the front post and Sam Fink’s header looped over the crossbar. The next opportunity arrived from a counter attack in the 10th minute as Kyle Greig was played behind the defense by Hilton but his pullback pass looking for Russell Cicerone could not be controlled in the area and the ball went out of play. Louisville would respond with some threatening crosses in the offensive third but STLFC goalkeeper Jake Fenlason and the backline would stand firm to limit the danger. Hilton then had two great chances to open the scoring, first from a free kick that went through everyone in the 27th minute and the next from a shot inside the penalty area that was palmed away from the bottom corner by Louisville goalkeeper Ben Lundt in the 32nd minute to see the first half end level at 0-0.

The second half saw Louisville City FC create the more dangerous opportunities out the gate as Naill McCabe forced two saves from Fenlason in the 50th and 54th minutes before Hilton responded with a shot from distance that flew over crossbar in the 56th minute. Magnus Rasmussen then had a free effort from the penalty area in the 61st minute which looked like it would break the deadlock but Fenlason was able to make the diving save. STLFC was then close to opening the scoring, first in the 65th minute as Dikwa crossed to Greig but his first-time effort went wide and then substitute Paris Gee took a shot from distance that was headed for the bottom corner before Lundt saved in the 88th minute. It would be a frantic finish as Louisville pressed for the winner which forced Matt Bahner to make a clearance off the goal line in stoppage time but neither side could find a goal as the game finished 0-0.

“It was a monumental effort from the guys again tonight,” said STLFC Head Coach Anthony Pulis. “With everything they have been through this week with all the travel, minutes played and only 14 healthy field players, they deserve enormous credit.” 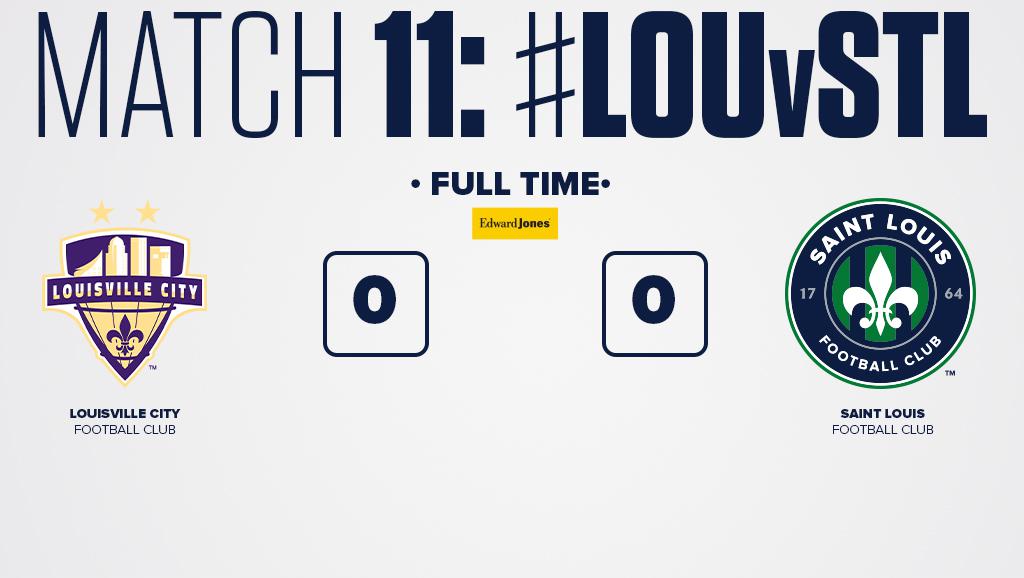