STLFC Advances in US Open Cup with 3-1 Win

ST. LOUIS, Mo. – Saint Louis FC won 3-1 against Forward Madison FC in front of 1,206 fans at WWT Soccer Park to advance to the Fourth Round of the U.S. Open Cup.

STLFC got off to a fast start with two goals as Paris Gee and Guy Abend both struck in the first six minutes before Forward Madison FC got one back through Don Smart in the 38th minute. Saint Louis FC would come out strongly in the second half and Russell Cicerone sealed the win with the third goal in the 72nd minute to book a place in the Fourth Round for the third time in club history. The draw for the next round will take place tomorrow, May 30th at 10:00 a.m. CT where Saint Louis FC will learn the venue and MLS opponent for the Fourth Round.

The first half saw Saint Louis FC dominate out the gate and defender Gee was able to get forward and cut inside before ripping his shot inside the near post in the 2nd minute. The next goal would arrive soon after as midfielder Guy Abend was in the right place at the right time to bury a rebound in the 6th minute to take an early 2-0 lead. Abend would then have another chance from outside the box in the 18th minute but his effort would go over the crossbar. Forward Madison would respond on the counter in the 38th minute as Don Smart was played behind the defense and his shot beat STLFC goalkeeper Tomas Gomez at the near post to enter the halftime break at 2-1.

The second half saw the home side on a mission to put the game away but Forward Madison nearly equalized in the 52nd minute with a shot from Jiro Barriga Toyama that was palmed away by a diving Gomez. The next chance for Saint Louis FC came in the 64th minute as Lewis Hilton swung in a free kick that found the head of Abend but his effort went narrowly wide. Hilton would not be denied from the next opportunity, however, as his corner kick found Cicerone unmarked in the box and his header rocketed past Forward Madison goalkeeper Brian Sylvestre in the 72nd minute. The end of the game would see STLFC Academy players Nichi Vlastos and Kippy Keller make their professional debuts and the match would finish 3-1 for Saint Louis FC to book their place against an MLS opponent in the next round of the U.S. Open Cup.

“It was a really good result, obviously in any cup competition the objective is to win to get through to the next round,” said STLFC Head Coach Anthony Pulis. “There were elements of the performance I wasn’t pleased with tonight because at times we looked like a team that has had a stop-start month and hasn’t played for two weeks, so hopefully we get that rustiness out and are sharper on Saturday against Memphis [901 FC].” 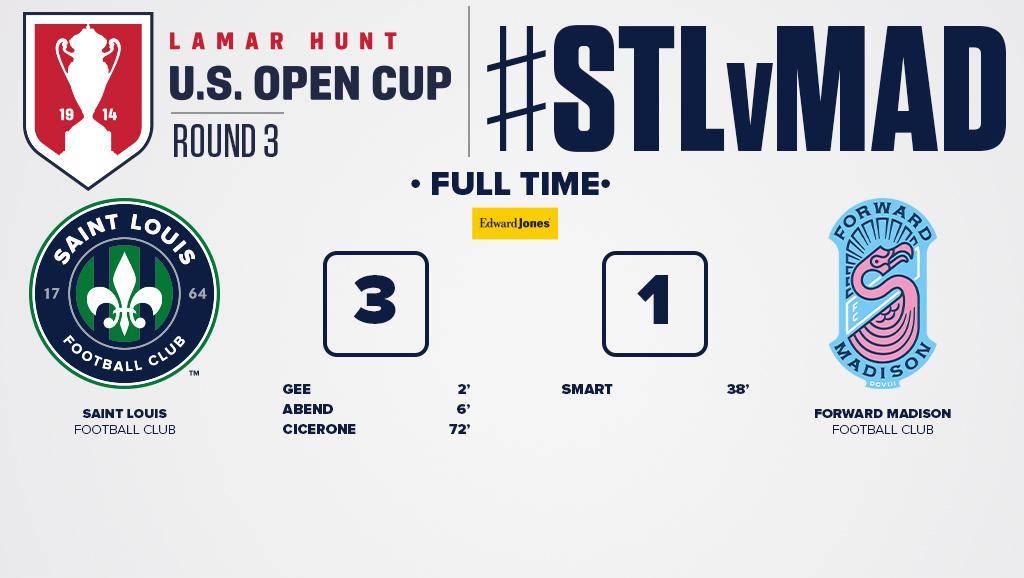