STLFC Falls 2-1 Away to Hartford Athletic

HARTFORD, Ct. – Saint Louis FC fell 2-1 away to Hartford Athletic in front of 5,132 fans at Pratt & Whitney Stadium in Match 13 of the USL Championship season.

Saint Louis FC opened the scoring in the 16th minute as Matt Bahner hit a rocket into the top corner from outside the box for his first goal of the season. Hartford Athletic would equalize with a goal from Harry Swartz in the 27th minute for the first goal conceded by Saint Louis FC on the road this season. Hartford would then seal their first home win of the season from the penalty spot as substitute Philip Rasmussen fired home in the 85th minute to claim all three points. The result sees Saint Louis FC fall to 5-2-4 with 19 points while Hartford Athletic improves to 2-9-3 with 9 points in the USL Championship Eastern Conference.

The first half saw Saint Louis FC on the front foot and the first chance arrived in the 8th minute as Lewis Hilton took a free kick from a decent position that went over the crossbar. Paris Gee had the next chance for the away side as he cut inside the defense and let loose with a shot that was palmed away by Hartford goalkeeper Frederik Due for a corner kick. The ensuing corner kick was seemingly cleared by the Hartford defense until Bahner hit a first-time effort from almost 30 yards out that nestled in the top corner. The next chance would see Hartford Athletic equalize, however, as Swartz was found rushing into the box with a cross and he was able to get enough on it to go past a diving Fenlason. Fenlason was then called to make a point-blank save on former STLFC player Jose Angulo just before halftime as his header went straight at the STLFC goalkeeper in the 43rd minute to see both sides even at the halftime break.

The second half saw STLFC Head Coach Anthony Pulis make two substitutions as Bradley Kamdem Fewo and Caleb Calvert made their return from respective lengthy injuries. Russell Cicerone looked dangerous in the first half and he had a chance from distance that went narrowly wide of the post in the 49th minute. It would be another former STLFC player Sebastian Dalgaard to make the difference, however, as he was brought down in the box by Bahner for a penalty and substitute Rasmussen stepped up to convert in the 85th minute. The loss marks only the second time that Saint Louis FC has conceded more than one goal – the other a 3-2 loss against Birmingham Legion – and breaks a 477 minute clean sheet streak on the road.

“I thought the performance in the first half was well below par,” said Pulis. “The second half was a slight improvement. We talk about having a mentality to find a way to win and we obviously didn’t have that tonight conceding the two goals in the manner we did. We have to get back to defending properly first and foremost and understanding that is the foundation of what will make us successful.” 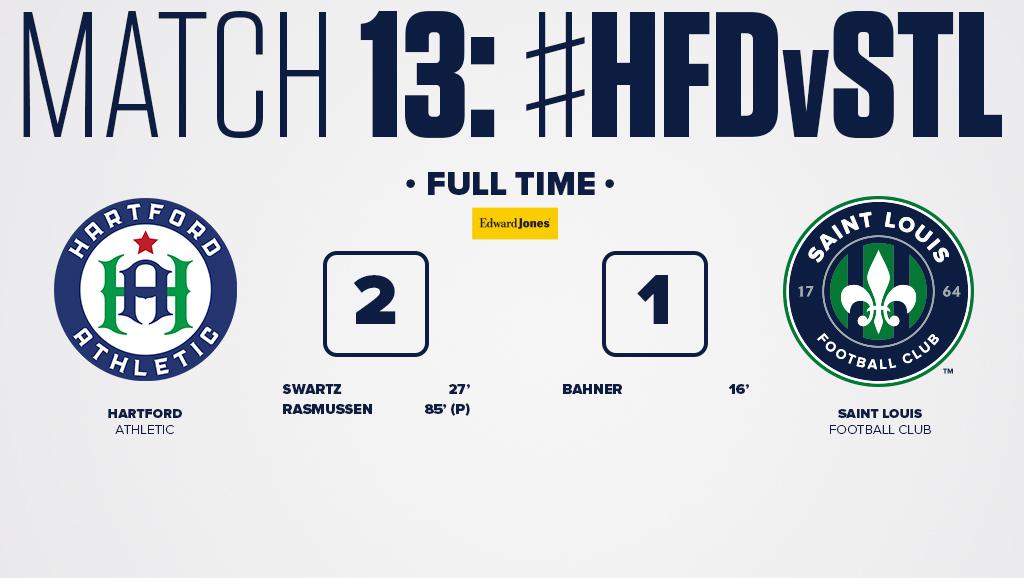