Saint Louis FC got off to a thrilling start with a goal from Austin Martz in the 17th minute before Guy Abend doubled the lead in the 21st minute to take an early 2-0 lead. Chicago Fire would get a goal back from the penalty spot through Nemanja Nikolic in the 72nd minute but could not get another as Saint Louis FC advanced to the Round of 16 for the first time in club history.

The first half saw Chicago Fire press early and they nearly opened the scoring in the 2nd minute but STLFC goalkeeper Tomas Gomez was there to make a couple of saves and the defense withstood the attack. The next chance would see Saint Louis FC open the scoring from a quick run of play as Russell Cicerone beat his man on the outside and his cross found a diving Martz for his first goal for the club. The home side would soon double their advantage in the 21st minute as Lewis Hilton whipped in a free kick that found Abend unmarked in the area and he headed past Chicago goalkeeper Kenneth Kronholm for his second goal in the U.S. Open Cup competition after scoring in the previous round against Forward Madison FC. The final chance of the first half would fall to Chicago’s CJ Sapong in the 39th minute but his volley would be saved by Gomez to take the 2-0 advantage into the halftime break.

The second half was a more open affair and the Chicago Fire nearly got a goal early in the 48th minute but Gomez made a diving save and the rebound was cleared off the line by Phanuel Kavita. Gomez was then called to make two great saves in the 55th and 56th minutes as Chicago had a flurry of corner kicks that created opportunities on goal but the defense stood strong. STLFC nearly added a third goal in the 68th minute from another Hilton free kick as substitute Caleb Calvert got a head on the ball but it hit the post and agonizingly trickled across the goal. The game then seemed to turn in the 72nd minute as Chicago was awarded a penalty and Nikolic converted to see the game at 2-1 for a nervy finish. However, Saint Louis FC was able to limit any more chances and saw out the game to get the first win against an MLS opponent and advance to the U.S. Open Cup Round of 16 for the first time in club history.

“I’m really proud of the players, I think the effort they put in tonight was immense and I think we played some good football,” said STLFC Head Coach Anthony Pulis. “I’m not just saying it, I genuinely believed that we could win the game tonight. I’m fortunate to work with a great group of players every day—their mentality is great—and I knew that if we played anywhere near where we are capable of individually and collectively that we would give Chicago a run for their money.” 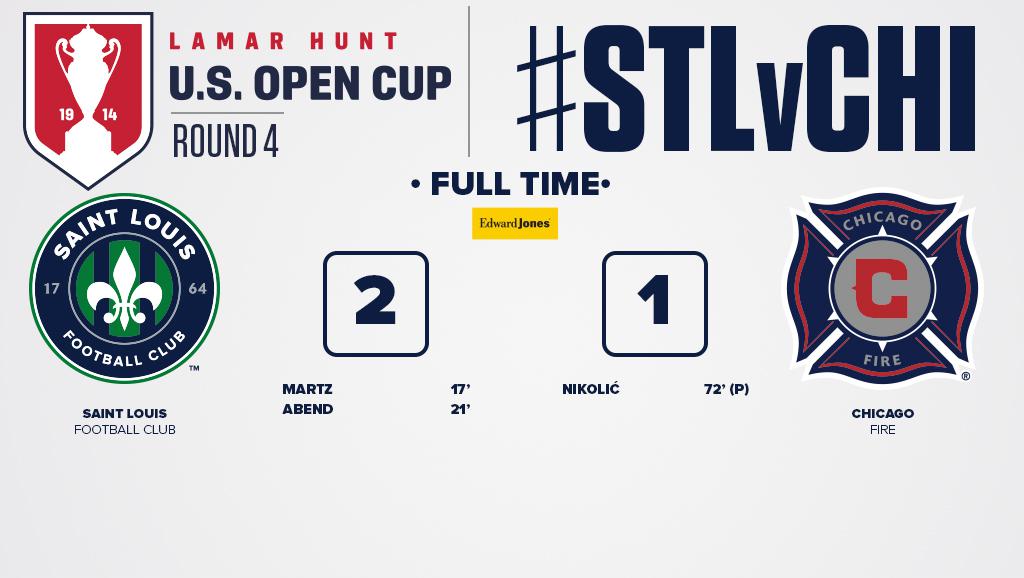