BETHLEHEM, Pa. – Saint Louis FC fell 3-1 away to Bethlehem Steel FC in front of 222 fans at McCarthy Stadium in Match 14 of the USL Championship regular season.

Bethlehem would score three unanswered goals in the first half as James Chambers opened the scoring in the 19th minute before Faris and Walter Cortés added to the deficit in the 25th and 37th minutes, respectively. Saint Louis FC would play a majority of the game with an extra man as Faris was sent off in the 27th minute but the teams would be level at 10-men after the 81st as Oscar Umar received a second yellow card. Saint Louis FC was able to get a late goal through Kadeem Dacres in the 85th minute but it was not enough as the team falls to 5-3-4 with 19 points while Bethlehem Steel FC improves to 4-7-4 with 16 points in the USL Championship Eastern Conference.

The first half saw Saint Louis FC on the front foot as they created a majority of the early chances with the first arriving in the 11th minute as Russell Cicerone beat his defender but had his left-footed shot saved at the near post by Bethlehem goalkeeper Carlos Miguel Coronel. The next chance would fall to team captain Sam Fink in the 15th minute as he won a header on the corner kick but the effort went just wide. Bethlehem would then score through Chambers in the 19th minute as his low shot beat STLFC goalkeeper Jake Fenlason for only his ninth goal conceded all season. The home team would score a second goal soon afterwards in the 25th minute as Faris was played on a counterattack and tucked his shot underneath a diving Fenlason. Saint Louis FC looked to regain momentum as Faris was sent off with a straight red card in the 27th minute but Bethlehem would add a third goal after some good combination play in the box saw Cortés make it 3-0 heading into the halftime break.

The second half saw STLFC Head Coach Anthony Pulis make two substitutions as Paris Gee and Kyle Greig were brought on and the changes nearly paid off early as Caleb Calvert hit the ball on the half-volley but it was palmed away by Coronel in the 51st minute. The next chance would arrive for substitute Gee in the 66th minute as he cut inside his defender but his shot was saved at the near post. Umar would then be sent off for his second yellow card offence in the 81st minute in a game that saw a total of seven yellow cards and two red as both teams finished with 10-men. Dacres would score his first goal of the season in the 85th minute off a deflected pass from Cicerone but it would not be enough as Saint Louis FC picked up a consecutive loss for the first time this season.

“I will take full responsibility for that tonight,” said Pulis. “Quite clearly in the first half the players weren’t anywhere near the level expected and that’s on me. It’s a long season, we’ll go through ups and downs, so it’s important we have some perspective, stay emotionally stable, and most importantly we get a positive reaction against North Carolina next Saturday to get our league campaign back on track.” 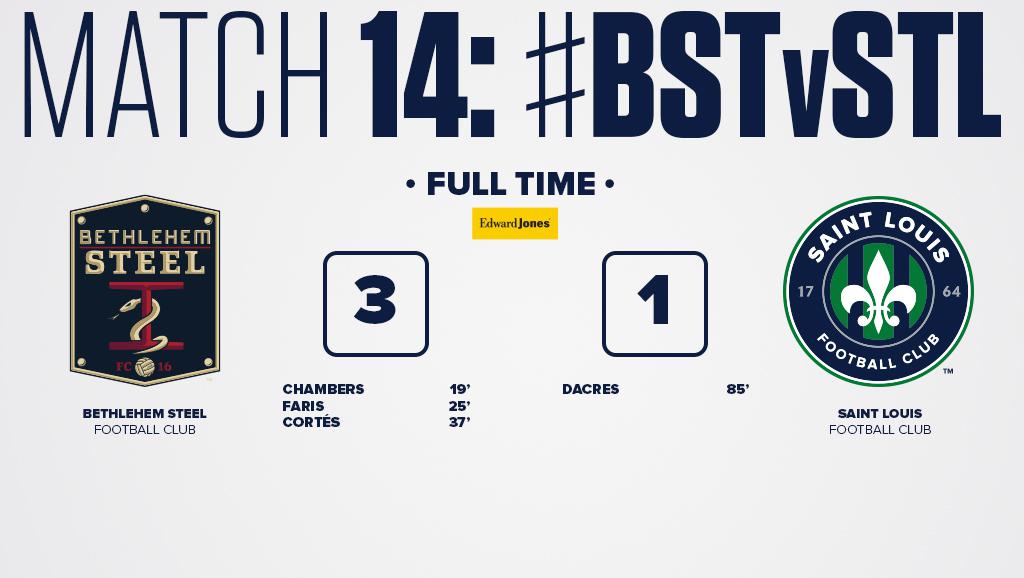