ST. LOUIS, Mo. – Saint Louis FC came from behind to draw 2-2 against North Carolina FC in front of a sell-out crowd of 5,963 at WWT Soccer Park in Match 15 of the USL Championship regular season.

North Carolina controlled the first half of the game and broke the deadlock with a header from Donovan Ewolo in the 32nd minute. Saint Louis FC would come out strong in the second half after making a couple of substitutions and it would be substitute Albert Dikwa to level it in the 47th minute. North Carolina FC would tally another in the 81st minute through Steven Miller and looked destined for the win before Kadeem Dacres earned a penalty in the 88th minute and captain Sam Fink stepped up to convert in stoppage time to see both sides finish level at 2-2. The result means Saint Louis FC improves to 5-3-5 with 20 points while North Carolina FC moves to 7-2-6 with 27 points in the USL Championship Eastern Conference.

The first half saw North Carolina FC create a majority of the scoring chances with the first arriving in the 8th minute as Ewolo let loose from distance but his shot went over the crossbar. STLFC created most of their chances from set pieces and Lewis Hilton nearly scored from a free kick from the left side of the penalty area in the 12th minute but his shot found the side netting. STLFC goalkeeper Tomas Gomez was then called to make two saves as he denied Yamikani Chester in the 22nd minute before saving Dre Fortune’s effort from distance in the 31st minute. NCFC would finally break down the STLFC defense as Miller created space on the left and his cross found Ewolo in the box for a looping header which nestled in the top corner in the 32nd minute. Saint Louis FC would respond with a free kick opportunity in first half stoppage time as Hilton found Kyle Greig in the box but his header went over the crossbar to see the home side down 1-0 heading into the halftime interval.

The second half saw STLFC Head Coach Anthony Pulis make two substitutions as Dikwa and Kadeem Dacres were brought on and they made an immediate impact as Dikwa as played by Guy Abend behind the defense and his low shot found the bottom corner for his first goal of the season. Russell Cicerone then created another opportunity for Dikwa in the 53rd minute but his first-time effort was collected by NCFC goalkeeper Alex Tambakis. Fellow substitute Dacres had a good effort as he cut inside his defender with a tricky move but his shot was saved by Tambakis in the 73rd minute. North Carolina FC would then regain the lead as Miller was found in the box by Caleb Duvernay and his shot ricocheted off Fink and past a helpless Gomez in the 81st minute. The home side would press for an equalizer and they would get it in stoppage time as Dacres was fouled in the box and Fink stepped up to score his fourth goal of the season and third from the penalty spot to earn the draw. There was a late flurry of action from Saint Louis FC at the end as Hilton had a volley blocked in the penalty area but the game would finish level at 2-2.

“I think it could turn out to be a really big point for us to be honest with you,” said Pulis. “Obviously, first half we weren’t anywhere near the level we know we are capable of. Second half was better, but it’s an issue when you have such a thin squad – we have 15 field players available – and when you go through a deep [U.S. Open] Cup run like we’re going through, it was obvious there were players that needed a rest but we didn’t have any other option. I think we showed a lot of resilience, a lot of character to come back twice against a really good team.” 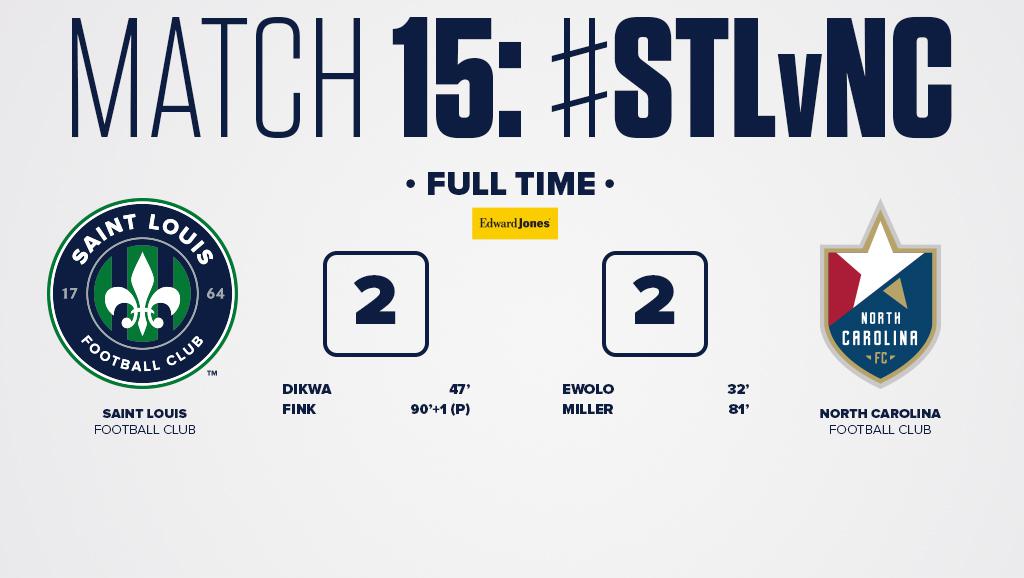