ST. LOUIS, Mo. – Saint Louis FC midfielder Austin Martz announced his retirement from professional soccer today and his contract will be mutually terminated by the club after this weekend’s match against Swope Park Rangers.

Martz finishes his professional career with a total of 97 appearances and 12 goals scored spanning across four different clubs. He played collegiately at Georgetown University from 2011-2014 where he made 74 appearances with four goals scored, including the lone goal in the 1-1 penalty shoot-out loss to eventual champions University of Virginia in the 2014 NCAA Tournament Quarterfinals. Martz also played for the Baltimore Bohemians during the 2013, 2014, and 2015 USL League 2 seasons where he made 21 appearances and scored seven goals. He then signed his first professional contract with Pembroke Athleta in the Maltese Premier League, making 16 appearances and scoring five goals during the 2015 season before returning to the United States in February 2016 to sign with the Wilmington Hammerheads where he made 26 appearances and scored four goals. Martz then joined Orlando City B at the start of the 2017 season and played in 30 games with two goals scored during the campaign.

Martz would sign with Saint Louis FC at the start of 2018 and make 15 appearances with two assists over 760 minutes as he spent a majority of the season recovering from hip surgery. This year, he has made seven appearances in USL Championship competition and three appearances in the U.S. Open Cup. Martz recorded his first goal for the club in the U.S. Open Cup Fourth Round match against the Chicago Fire with a diving header in the 17th minute to provide the catalyst for a 2-1 victory over an MLS opponent for the first time in club history. He will be available for selection as Saint Louis FC travels to face Swope Park Rangers this Sunday, June 30th at 4:00 p.m. CT before having his contract terminated as he begins the next phase of his career.

“Saying goodbye is really hard,” said Martz. “I told the boys that my greatest joy as a professional was loving and serving my brothers in whatever capacity I could. While my time wearing the crest is over, I’ll never stop being their teammate or someone they can rely on. Thank you to all of the coaches I’ve had, but especially Anthony for believing in me and encouraging my growth as a human being the last two and a half years we’ve navigated together. As I prepare for this new transition and cling to my faith in Jesus, I hold closely a verse that says, ‘The Lord will guard your going out and your coming in [everything that you do] from this time forth and forever’ [Psalm 121:8]. Thank you to the Louligans and all of the fans. You embrace community as well as anyone I know. Thank you, Saint Louis, for a time I’ll never forget.”

“It’s been an honor and a privilege to have coached Austin over the last two and a half years,” added STLFC Head Coach Anthony Pulis. “I have the utmost respect for him as a person and as a teammate. He has played a huge part in the building of our culture here and the success we’ve had over the last 16 months. He will be missed immensely both on and off the field. I wish Austin and his wife Hannah all the very best in the next chapter of their lives.” 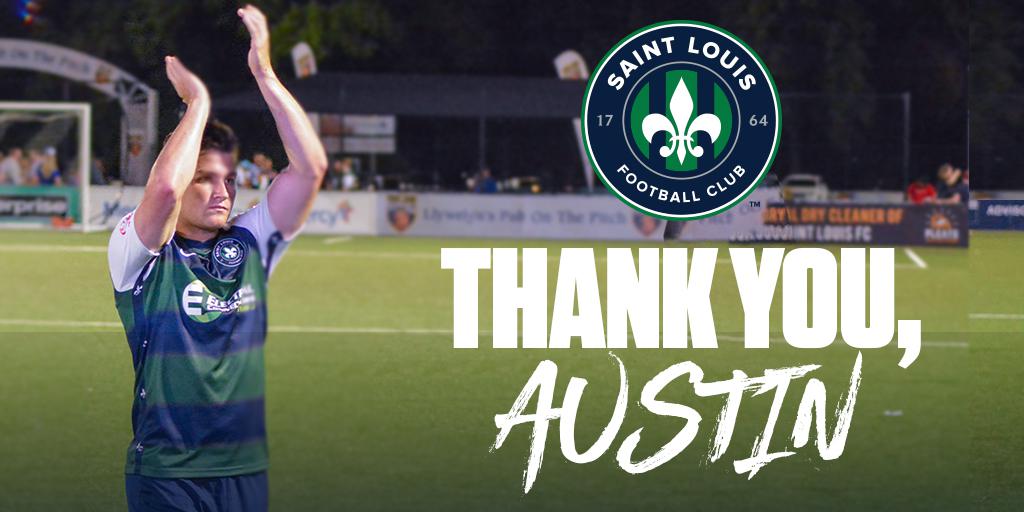