Swope Park would break the deadlock in the 21st minute as former STLFC Academy player Wan Kuzain Wan Kamal laid the ball off for Felipe Hernandez to hit from outside the box into the bottom corner. Saint Louis FC would get one back in the 78th minute through Kadeem Dacres but Swope Park would respond with the winner from Ethan Vanacore-Decker in the 82nd minute to claim all three points. The result sees Saint Louis FC fall to 5-4-5 with 20 points while Swope Park Rangers improves to 2-8-6 with 12 points in the USL Championship Eastern Conference.

The first half saw Saint Louis FC with a majority of the possession and they appeared to score early as Guy Abend turned the ball over the line following Lewis Hilton’s cross in the 2nd minute but he was ruled offside. Hilton then nearly scored as Austin Martz – who recently announced his retirement following this game – found Albert Dikwa at the back post and his header back into the area found the Englishman but his shot was blocked out for a corner in the 13th minute. It would be Kyle Greig to come closest to scoring as he was found in the box by Bradley Kamdem Fewo but his header bounced off the post in the 20th minute. Swope Park would respond with the opening goal in the 21st minute as Hernandez rolled the ball into the bottom corner from outside the box for his seventh goal of the season. STLFC then attacked down the left as Dacres crossed the ball to Dikwa but his first-time effort went narrowly wide in the 32nd minute. The final chance of the first half arrived for Hilton as a free kick routine rebounded to him inside the box but his shot was saved by Swope Park goalkeeper John Pulskamp to preserve the home side’s 1-0 lead heading into the halftime break.

The second half was more one-sided in STLFC’s favor in terms of creating chances with Dacres getting on the end of most of them. He had a volley effort go wide in the 59th minute before having a good exchange of first-time passes with Dikwa inside the area but his left-footed shot from the penalty spot was saved by Pulskamp. Dacres would finally convert in the 78th minute as he rose to meet the cross from substitute Paris Gee and thundered his header into the center of the net. However, as Saint Louis FC pressed for the winner, Swope Park would score on the counterattack as Vanacore-Decker was in the right place at the right time to fire a rebound into the back of the net past STLFC goalkeeper Tomas Gomez who made an initial save. Swope Park Rangers would then finish the game with 10-men as Hernandez received a straight red card in the 90th minute but the seven minutes of stoppage time and man-advantage would not be enough as STLFC’s comeback efforts came up short.

“I really feel for the players to be honest with you because I think we really dominated the game for large periods,” said STLFC Head Coach Anthony Pulis. “Unfortunately, we switched off in two key moments by giving the ball away in poor areas and it has cost us. Regarding the performance level, if we keep performing like that then the league form will turn around quickly because I thought we dominated possession, moved the ball well and created chances.” 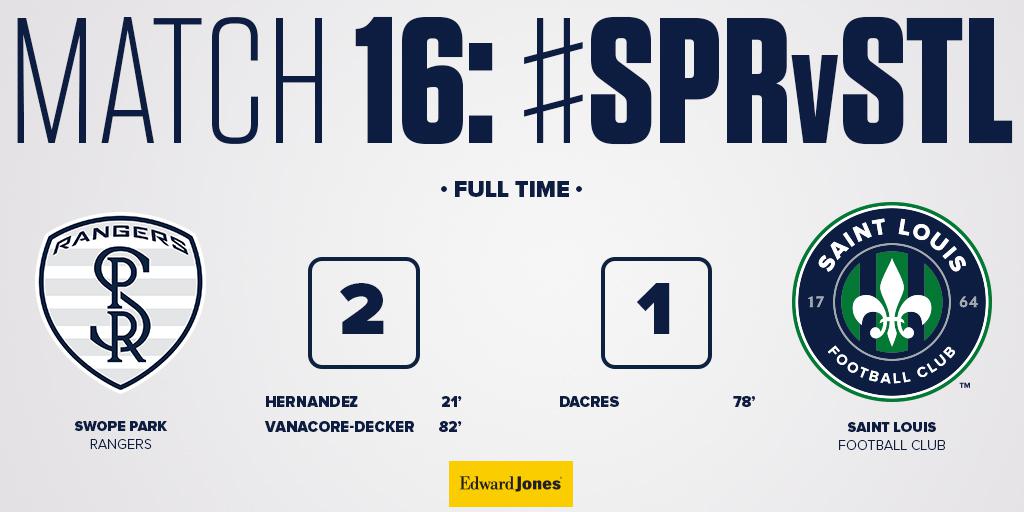