ST. LOUIS, Mo. – Saint Louis FC came from behind to draw 2-2 against Loudoun United FC in front of 4,564 fans at World Wide Technology Soccer Park in Match 17 of the USL Championship regular season.

Loudoun grabbed the lead through Kyle Murphy in the 41st minute before doubling their advantage shortly after halftime as Nelson Martinez bent his shot into the far post in the 51st minute. Saint Louis FC would press to equalize and grabbed the first goal through Kyle Greig in the 57th minute before Russell Cicerone grabbed the leveler in the 73rd minute. The result sees Saint Louis FC improve to 5-4-6 with 21 points while Loudoun moves to 4-6-4 with 16 points in the USL Championship Eastern Conference.

The first half was a sluggish affair as both sides looked to establish possession as they battled the heat. Saint Louis FC was forced to make an early substitution as Albert Dikwa went down with an injury and Greig was brought on in the 10th minute. Most of the chances fell to Loudoun United throughout the first half but all of their shots were taken from distance and easily collected by STLFC goalkeeper Jake Fenlason. The home side appeared to score the opener as Cicerone turned in the ball after Kadeem Dacres made a run in the box but he was ruled offside. Loudoun would score the opener soon afterwards as Murphy got on the end of a cross from Orlando Sinclair that skipped across the box and his first-time effort beat Fenlason to take a 1-0 lead into halftime.

The second half saw STLFC nearly equalize immediately as Greig was found at the back post by a whipped in ball from Cicerone but his attempted volley went over the net. Loudoun would then get a second goal from Martinez as he collected the ball outside the box and curled the ball into the far post past a helpless Fenlason in the 51st minute. However, Greig would give the home side hope in the 57th minute as he got his head on a cross from Cicerone to score his 50th career USL Championship goal. Cicerone would turn from provider to scorer in the 73rd minute as he pounced on a rebound following a cross from Lewis Hilton for his fourth goal of the season. STLFC debutant Matt Thomas would then nearly score the winner in the 80th minute as he collected the ball on the left side but his shot trickled agonizingly past the far post. Both sides continued to press for the winner but neither could find it as Saint Louis FC picked up their second successive 2-2 come from behind draw at home.

“I’m incredibly proud of the players for coming back from two goals down,” said STLFC Head Coach Anthony Pulis. “I think they showed what they’re about from a mentality standpoint, and where we’ve been from a recent run of results in the league, to be two-nil down and to get two goals back I’m very proud. At the same time, I’m frustrated and disappointed because we gave ourselves too much of a mountain to climb again and we have to stop doing that.” 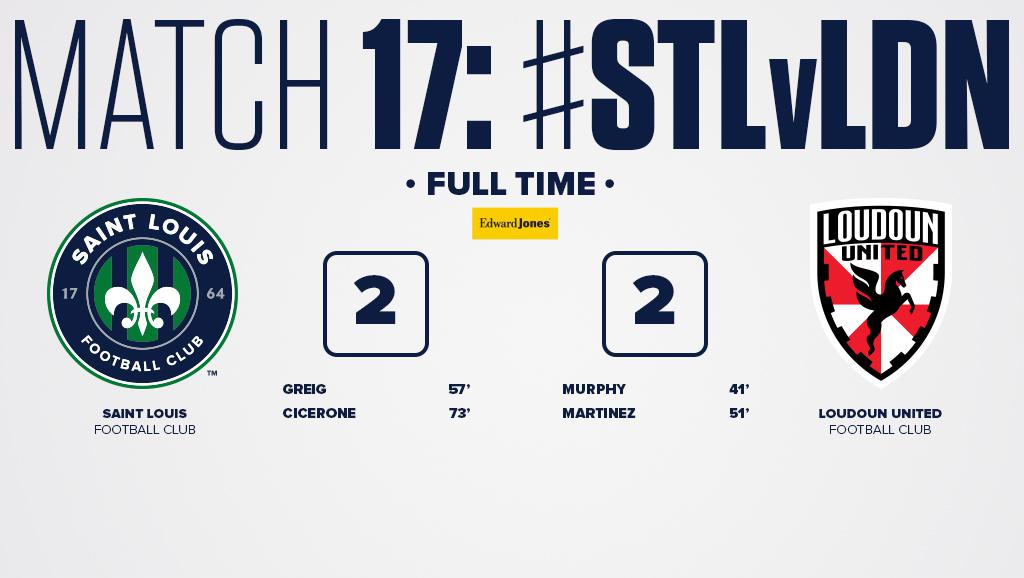