Atlanta United opened the scoring in the second half through Gonzalo Martinez after a defensive turnover in the 52nd minute before Josef Martinez sealed the victory from the penalty spot in stoppage time. The result sees Saint Louis FC’s historic run end in the U.S. Open Cup as one of two USL Championship teams left in the competition and Atlanta United will advance to the Semifinals with a draw tomorrow, July 11th at 1:00 p.m. CT determining the opponent and game location.

The first half saw Atlanta United with a majority of the possession and they nearly opened the scoring in the 5th minute as STLFC goalkeeper Tomas Gomez was forced to make a save on a Gonzalo Martinez effort from the left side of the box. Martinez then had an effort from inside the box following some quick interplay with Josef Martinez but his shot found the side netting. STLFC would respond on the counter and Paris Gee was able to beat his defender on the sideline before his shot from outside the box was collected by Atlanta United goalkeeper Brad Guzan in the 16th minute. Gomez would then make another big save in the 24th minute as he came out to challenge Josef Martinez before newly-signed Emerson Hyndman collected the rebound and had his shot cleared from the goal by Sam Fink. Fink would then threaten on the other end as he got his head on a corner kick taken by Lewis Hilton and his effort clipped the near post before going out in the 37th minute to see both sides remain level at 0-0 going into the halftime break.

The second half saw Atlanta United open the scoring as Hyndman pounced on a defensive error and found Gonzalo Martinez who calmly placed his shot beyond Gomez in the 52nd minute. The next chance for the away side would arrive to Kadeem Dacres as he controlled the ball in the box but his volleyed effort went wide in the 62nd minute. The clearest chance to equalize would come to Fink from another corner kick situation as he was found unmarked at the far post but his header would not find the target in the 69th minute. Gomez was then called to make a diving save on a shot from outside the box by Eric Remedi that was destined for the bottom corner in the 77th minute to keep Saint Louis FC in the game. However, as the away side pushed forward to find the equalizer, Atlanta United would counter and Sean Reynolds was forced to make a diving challenge and fouled substitute Dion Pereira for a penalty. Josef Martinez would step up to convert in stoppage time and Atlanta United would see out the 2-0 win to advance to the U.S. Open Cup Semifinals.

“I think the work the guys put in tonight was fantastic,” said STLFC Head Coach Anthony Pulis. “Let’s have a bit of perspective, we’re playing against a top team with top players who can pull you apart and move the ball really quickly. I would have liked to see us have a little bit more composure just to keep the ball, and obviously the manner we conceded the goals is really disappointing. That being said, we have to have some perspective of what we have done to get here and give ourselves an opportunity to compete against a top team and we can use the fact the [Atlanta Head Coach] Frank de Boer picked a strong line-up as a mark of respect.” 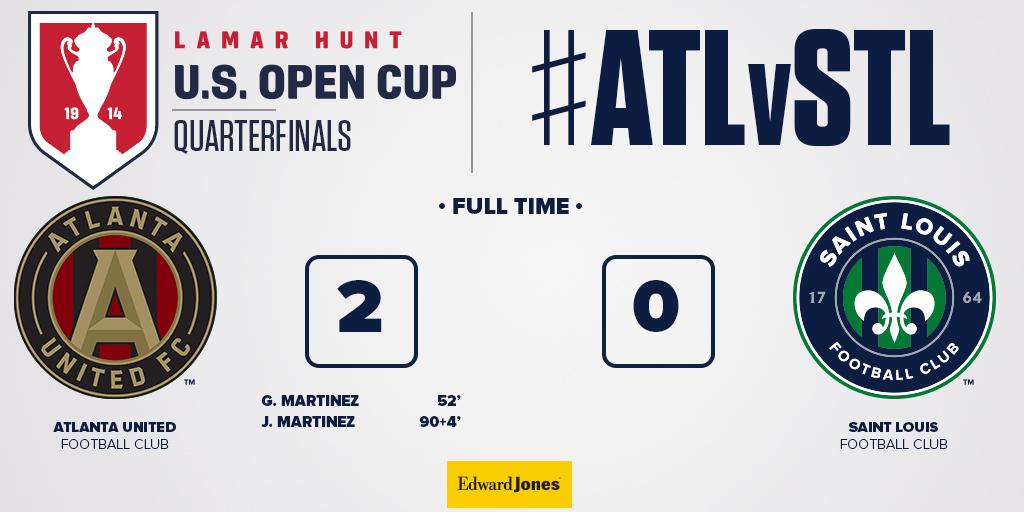