STLFC Falls 2-1 Away To Charlotte Independence

ST. LOUIS, Mo. – Saint Louis FC fell 2-1 away to Charlotte Independence in front of 2,007 fans at the Sportsplex at Matthews in Match 18 of the USL Championship regular season.

Charlotte opened the scoring early as Niki Jackson was found at the back post by Dominic Oduro in the 5th minute before they doubled their advantage shortly after the halftime interval as Enzo Martinez finished a cross from Joel Johnson in the 49th minute. Saint Louis FC would get a goal back in the 75th minute from former Charlotte player Caleb Calvert and would finish the game with a man advantage as Johnson was sent off but they could not complete the comeback. The result sees Saint Louis FC fall to 5-5-6 with 21 points while Charlotte Independence leapfrogs them in the standings with a 5-7-8 record and 23 points in the USL Championship Eastern Conference.

The first half saw Charlotte Independence with a majority of the scoring chances and it would not take long to break the deadlock as Oduro crossed the ball to the back post for Jackson to head home in the 5th minute. The best chance for Saint Louis FC in the first half would arrive soon afterwards as Bradley Kamdem Fewo found Kyle Greig who was able to settle the ball and get a low shot off but it was saved by Charlotte goalkeeper Brandon Miller. The next opportunity would fall to Charlotte Independence as Alex Martinez crossed the ball to Jackson who attempted an acrobatic bicycle kick but it went over the goal in the 25th minute. Greig’s shot in the 6th minute would be STLFC’s only shot in the first half and Charlotte Independence would take their 1-0 lead into the halftime break.

The second half started similarly to the first as Johnson found Martinez in the box and his first-time effort beat STLFC goalkeeper Jake Fenlason in the 49th minute to make it 2-0. STLFC would respond through Russell Cicerone as he played a one-two with Calvert and his point-blank header was palmed away by Miller in the 59th minute. Fenlason was then called to make a save on Enzo Martinez as he burst into the box and let loose with an effort in the 65th minute. Saint Louis FC would finally get one back in the 75th minute after sustained pressure as Calvert rose above his defender on a corner taken by Hilton and headed the ball into the ground past Miller. The home side would then lose a man in the 80th minute as Johnson was shown a straight red card after a foul on Kadeem Dacres but Saint Louis FC could not find another goal and the game would finish 2-1.

“We dominated play between both boxes for large stretches again, but it isn’t enough when we don’t defend basic crossing scenarios properly and aren’t ruthless enough in front of their goal,” said STLFC Head Coach Anthony Pulis. “We’re going through a really rough spell at the moment and this is when we all need to stick together, show our strength of character and find a way to pull ourselves out of this.” 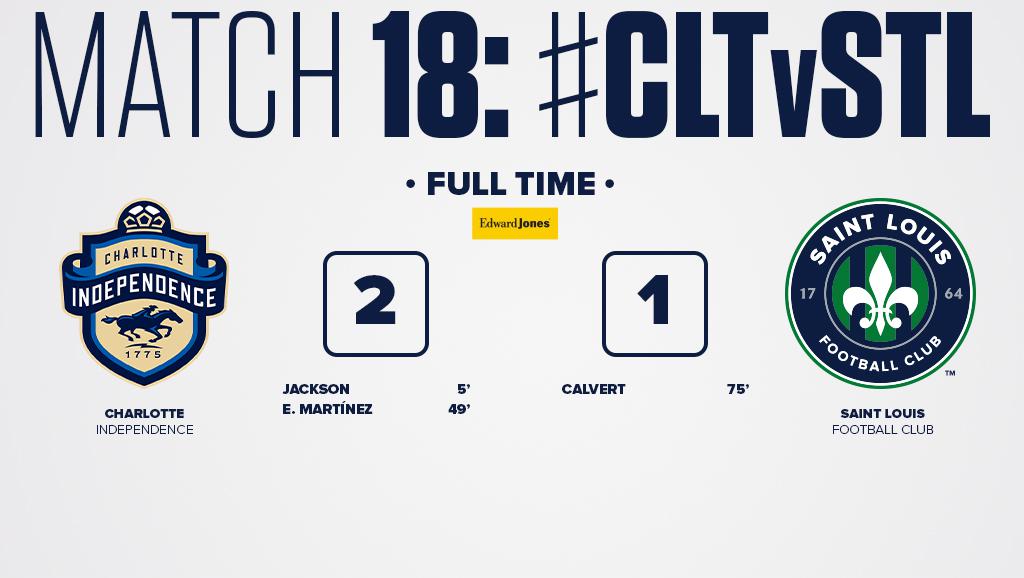