Tampa Bay opened the scoring in the 33rd minute through Sebastian Guenzatti before he added a quick second goal in the 36th minute. The home side would score a third goal through Leo Fernandez in the 79th minute before Saint Louis FC registered their first goal of the night as Kyle Greig headed in from a corner kick in the 87th minute. Tampa Bay would then add a late goal from Caleb Richards in the 91st minute to seal the 4-1 win. The result sees Saint Louis FC fall to 5-6-6 and remain on 21 points while Tampa Bay Rowdies improves to 12-1-7 with 43 points in the USL Championship Eastern Conference.

The first half saw Tampa Bay create the most opportunities with a majority of possession. Saint Louis FC had an early chance in the 12th minute as Caleb Calvert led a counterattack which finished with Lewis Hilton taking a shot from distance that was blocked before hitting the target. Tampa would then break the deadlock in the 33rd minute as Guenzatti was at the back post to nod home from Fernandez’s cross. He would then add a quick second as he collected the ball inside the box and finished into the bottom right corner in the 36th minute to give Tampa Bay the 2-0 lead heading into the halftime interval.

The second half saw Saint Louis FC come out with more urgency but STLFC goalkeeper Tomas Gomez was called to make a pair of good saves on shots from distance, the first from Yann Ekra in the 58th minute and the second from Malik Johnson in the 60th minute. The next opportunity for STLFC fell to Greig who received the ball following a turnover and hit a low shot that was saved by Tampa goalkeeper John McCarthy in the 63rd minute. Tampa Bay would add a third goal on a fast break that saw Fernandez receive the ball in space on the left and hit a low shot past Gomez in the 79th minute. Greig would get one back for the visitors off a corner kick taken by Hilton in the 87th minute but Tampa would add another in stoppage time through Richards to win 4-1.

“The best team on the night won so credit to Tampa,” said STLFC Head Coach Anthony Pulis. “Ultimately, I take responsibility for this situation and the buck stops with me. I pick the team, the tactics and it’s my job to pull the players out of this slump. For me, there is only one way to get through this and that is hard work on the training field so we bounce back next week against Bethlehem [Steel FC].” 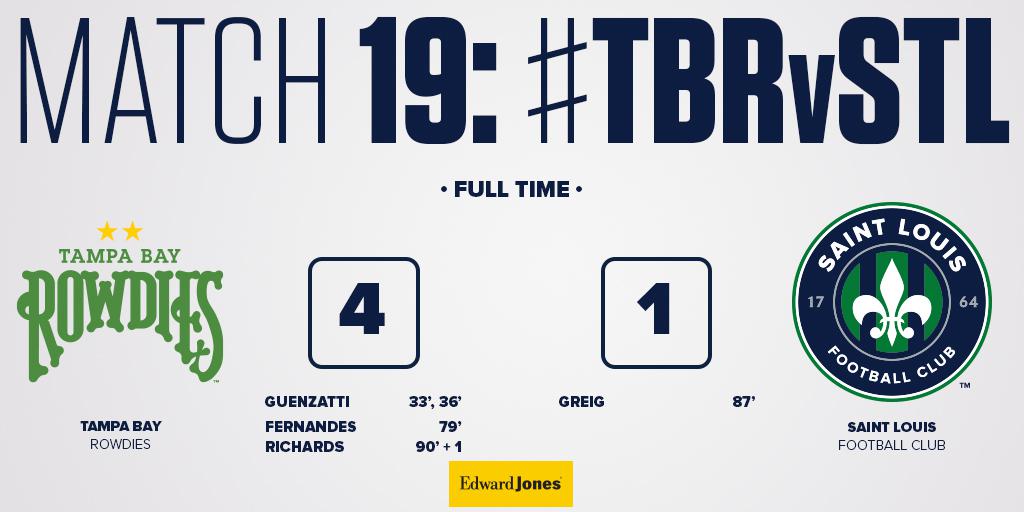