Saint Louis FC opened the scoring just before halftime as Kyle Greig headed home Masta Kacher’s cross for his fifth goal of the season in the 41st minute. They would then score two in quick succession after halftime with Lewis Hilton rocketing a shot off the crossbar in the 48th minute before Kadeem Dacres got on the end of a bouncing goal kick and finished calmly in the 49th minute. Saint Louis FC would see out the win to improve to 6-6-6 with 24 points while Bethlehem Steel FC falls to 6-11-4 with 22 points in the USL Championship Eastern Conference.

The first half saw Saint Louis FC create a majority of the scoring opportunities with the first arriving in the 7th minute as Greig was played behind the defense by Dacres but his shot was stopped by Bethlehem goalkeeper Tomas Romero. STLFC goalkeeper Tomas Gomez was then called into action as James Chambers whipped in a low free kick from the edge of the area but he made the save in the 10th minute. Hilton then had a great chance to open the scoring in the 25th minute as he was found unmarked in the box by Matt Bahner but his header flashed over the goal. The deadlock would finally be broken in the 41st minute as Greig got on the end of Kacher’s cross for his third goal in four games to take a 1-0 lead into the halftime break.

The second half started where the first left off as Saint Louis FC quickly doubled their lead when Hilton picked up the ball in the midfield and let loose from outside the box for his first goal of the season in the 48th minute. Dacres would add another one minute later as he won the ball following a goal kick from Gomez and he calmly rolled the ball into the back of the net for his third goal of the season. Gomez would make another great save in the 62nd minute as he denied Nathan Harriel in a one-on-one situation to preserve his first clean sheet of the season in his fourth start. STLFC would then create two chances from distance as Oscar Umar fired a rocket that was saved in the 66th minute and substitute Russell Cicerone had an effort fly past the far post in the 68th minute. Nichi Vlastos, who signed professionally from an Academy contract this week, then made his home debut and he nearly scored in the 86th minute but his first-time effort went narrowly wide and the game would finish 3-0 as STLFC kept their first clean sheet since May 18th against Louisville City FC.

“I thought it was a well-deserved victory,” said STLFC Head Coach Anthony Pulis. “I think we should have scored more goals, that’s the only disappointment tonight that we didn’t get five or six because I think we created some really good opportunities. Ultimately, I’m just really pleased for the players because we’ve been through a tough stretch, but we’ve tried to be positive and the players have worked extremely hard. They are a great group of players and I’m delighted for them, so hopefully now we can build some momentum.” 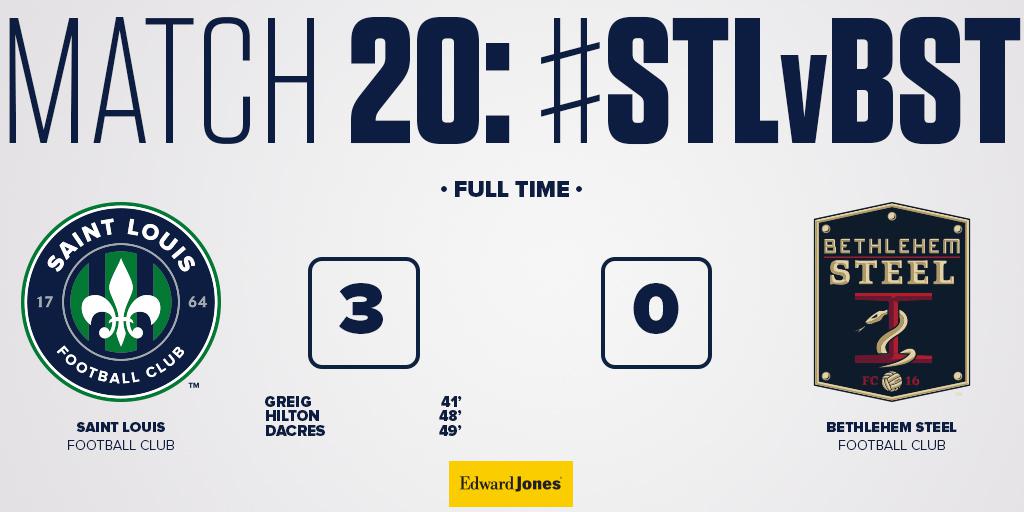