New York Red Bulls II opened the scoring through Sebastian Elney after he was played behind the defense and fired his close-range shot past STLFC goalkeeper Tomas Gomez at the near post in the 34th minute. STLFC would then finish the game with 10-men as Oscar Umar received a red card in the 87th minute and Elney would double his tally from the subsequent free kick to seal the 2-0 win. The result sees Saint Louis FC fall to 6-7-6 and remain on 24 points while New York Red Bulls II improves to 13-4-5 with 44 points in the USL Championship Eastern Conference.

The first half saw New York Red Bulls II with a majority of possession but it would be the away side to create the first chance as Lewis Hilton found space at the top of the box but his shot was saved by NY goalkeeper Evan Louro in the 2nd minute. New York would respond with a header from Tom Barlow that was cleared off the line by Collin Fernandez following a corner kick in the 12th minute. Gomez was then called to make a save in the 24th minute on a header from Sean Nealis before conceding the first goal to Elney in the 34th minute as he ripped a shot past him at the near post. STLFC then nearly immediately equalized as Kadeem Dacres was played behind the defense but Louro charged out to deny him. Gomez then made another save on an effort from outside the box taken by Barlow in the 41st minute to see the away side only down 1-0 going into the halftime break.

The second half was more open as both sides created chances but the first quality opportunity came for New York as Gomez was forced to deny Barlow on the counterattack in the 82nd minute. Umar would then earn a straight red card for fouling Bezecourt as the last defender in the 87th minute and the Frenchman’s free kick would be saved by Gomez but then rebound off the post and fall for Elney to bundle over the line in the 89th minute to see the game finish 2-0.

“I can’t fault the guys as they gave absolutely everything and did a lot of good things,” said STLFC Head Coach Anthony Pulis. “We learned the harsh way that fine margins dictate outcomes of games. We get denied a clear penalty once again, just as we did at Charlotte a few weeks ago, and it’s costing us valuable road points. Now we have to get ready for a big week ahead with two home games.” 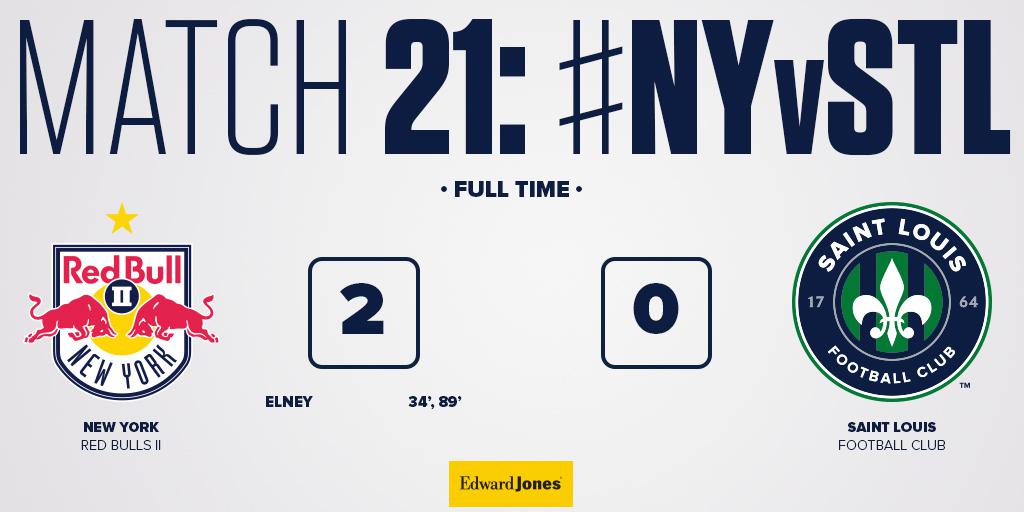