Saint Louis FC would play a majority of the game against 10 men as Cameron Lindley received a red card in the 27th minute but the team was held scoreless at home for the first time during the 2019 season to finish level. The point earned sees Saint Louis FC improve to 6-7-7 with 25 points while Memphis 901 FC moves to 4-10-7 with 19 points in the USL Championship Eastern Conference.

The first half saw Saint Louis FC create a majority of the opportunities with the first arriving in the 8th minute as Kadeem Dacres crossed the ball for Kyle Greig to get an acrobatic touch but his effort would take a deflection and go over the net. The next chance also fell to Greig as he controlled the ball well outside of the box but his volleyed effort went over the net in the 13th minute. Memphis would respond on the counter through new-signing and former STLFC loanee Pierre da Silva in the 16th minute but his low shot was collected routinely by STLFC goalkeeper Tomas Gomez. The game would then change seemingly in the home side’s favor in the 27th minute as Lindley received his marching orders after a high challenge on Collin Fernandez to see Memphis play the rest of the game with 10 men. The final chance of the half was created by Matt Bahner just before halftime but his left-footed shot was collected by Memphis goalkeeper Jeff Caldwell to see both sides even at the break.

The second half would be more of the same as Saint Louis FC pressed for the opener and Bradley Kamdem Fewo was the main outlet as he had a volley effort in the 56th minute fly narrowly wide. The next chance would come from a Kamdem Fewo cross as he found the head of Greig but his effort went over the net in the 62nd minute. Memphis would then have their lone chance of the second half in the 73rd minute as substitute Ewan Grandison hit a rocket from 30+ yards out that was tipped over by Gomez to preserve his second clean sheet of the season. The final chance for Saint Louis FC would come in the 88th minute as Kamdem Fewo’s cross forced Caldwell into a punching save that fell kindly to Cicerone but his volleyed effort landed on top of the net as the game finished level.

“I’m furious, it’s probably the angriest I’ve been to be honest,” said STLFC Head Coach Anthony Pulis. “It’s a number of things: the lack of urgency, the decision-making, the execution was nowhere near the level we need. Credit to Memphis, they obviously managed to manipulate the referee and wasted who knows how long, but we got to be better. They’re a good group to work with and I’ve stuck up for them and they’re fantastic boys, but we’ve got to be better than that.” 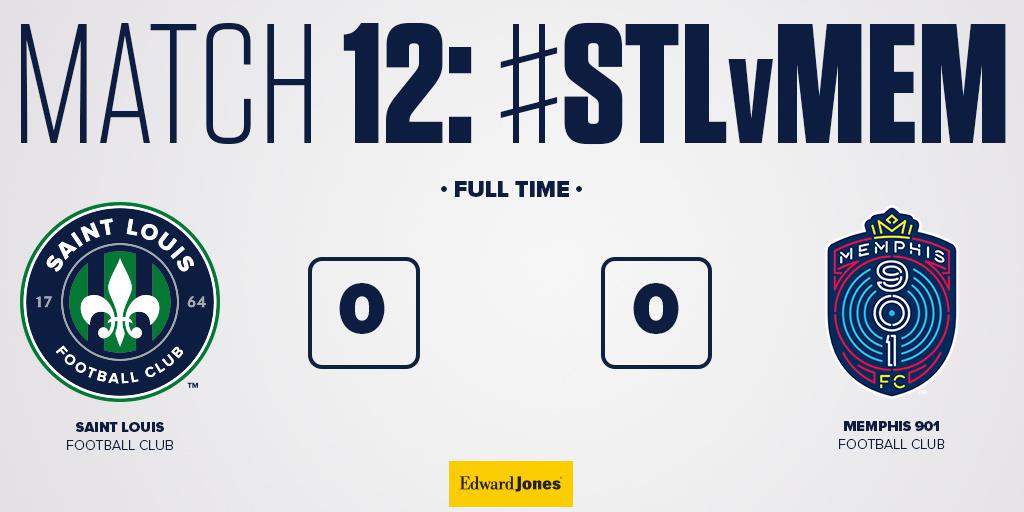