STLFC Comes Back to Draw 1-1 Against Charleston Battery

ST. LOUIS, Mo. – Saint Louis FC came back to draw 1-1 against Charleston Battery in front of 4,085 fans at West Community Stadium in Match 22 of the USL Championship regular season.

Charleston opened the scoring against the run of play in the 37th minute as Jarad van Schaif got an acrobatic touch on a bouncing ball that just went over the line for his third goal of the season. Saint Louis FC would equalize from the penalty spot as team captain Sam Fink converted for his fifth goal of the season in the 68th minute. Charleston would see Leland Archer receive a straight red card in the 80th minute but STLFC could not take advantage of the extra man and the score would finish level at 1-1. The point earned sees Saint Louis FC improve to 6-6-8 with 25 points while Charleston Battery move to 6-5-9 with 27 points in the USL Championship Eastern Conference.

The first half saw Saint Louis FC on the front foot as they created a majority of the chances. Russell Cicerone would create space for himself outside the box but his left-footed shot went high in the 13th minute before Kadeem Dacres had a similar effort from distance that was saved by Charleston goalkeeper Joe Kuzminsky in the 14th minute. Charleston would respond with a chance in the 19th minute as Zeiko Lewis received the ball and hit a volley that flew past the far post. Nikiphoros (Nichi) Vlastos, an STLFC Academy product making his first USL Championship start, then had an effort in the 22nd minute after receiving the ball from Cicerone but it went just wide. The best chance for the home side would then come in the 26th minute as Cicerone beat his defender and found Matt Bahner on the edge of the box with the cross but his shot cannoned off the crossbar. Charleston would then break the deadlock after Ian Svantesson’s attempted bicycle kick was saved by STLFC goalkeeper Tomas Gomez in the 36th minute but the ensuing corner kick was turned over the line by van Schaif with an acrobatic finish of his own to see the visitors take a 1-0 lead into the halftime break.

The second half saw Saint Louis FC press for the equalizer but the closest attempts came from set pieces. Lewis Hilton had two free kicks that were well-saved by Kuzminsky before Cicerone was taken down in the penalty area in the 67th minute. Fink would step up to convert his fifth goal overall and fourth from the penalty spot this season. Charleston would finish the game with 10-men as Archer received a straight red card in the 80th minute but the late push from STLFC would not be enough as the game finished at 1-1.

“I thought we played some really good stuff tonight,” said STLFC Head Coach Anthony Pulis. “I thought, barring a five to ten-minute spell in the first half, that we were in complete control of the game. I think we did a lot of good things, we moved the ball around well and defensively we looked fairly solid. The disappointing thing is we didn’t capitalize on our opportunities first half because we created four or five really good chances that we should have made the most of. But, credit to the guys, they rallied and I think we got a positive reaction in the second half and I think we deserved to win.” 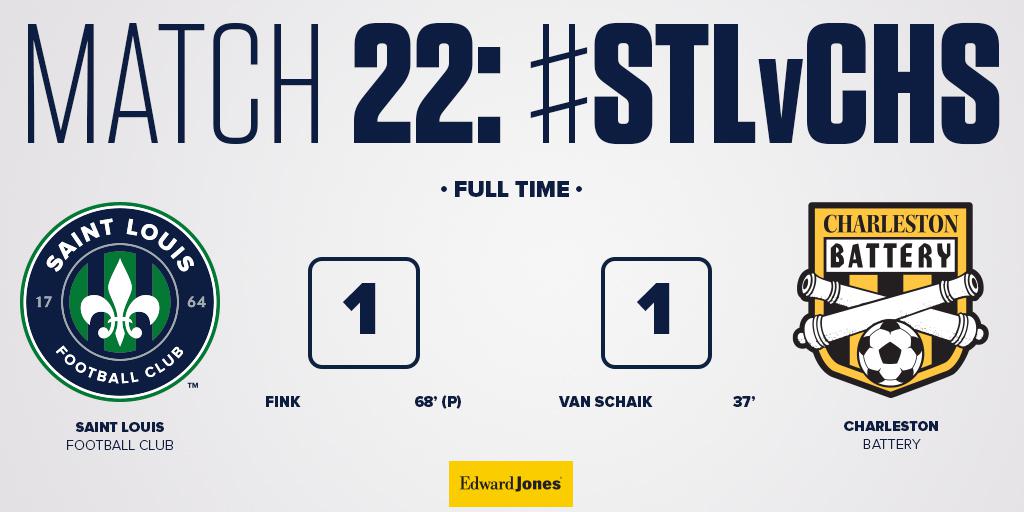