STLFC Falls 2-1 Away to Indy Eleven

INDIANAPOLIS, In. – Saint Louis FC fell 2-1 away to Indy Eleven in front of 10,035 fans at Lucas Oil Stadium in Match 23 of the USL Championship regular season.

Saint Louis FC kept it even until midway through the second half as Indy Eleven substitute Tyler Pasher slotted past STLFC goalkeeper Tomas Gomez on the counterattack in the 67th minute. They would double their advantage soon afterwards as Dane Kelly chipped the onrushing Gomez after winning a bouncing ball off Sam Fink in the 81st minute. The away side would score a consolation goal from a Lewis Hilton free kick in stoppage time but the comeback effort would fall short as the game finished 2-1. The result sees Saint Louis FC fall to 6-8-8 with 26 points while Indy Eleven improves to 13-4-4 with 43 points in the USL Championship Eastern Conference.

Saint Louis FC would start the game on the front foot as Paris Gee played an early cross for Kyle Greig to force a save out of Indy goalkeeper Evan Newton in the 1st minute. Kadeem Dacres would then have a shot saved from distance following a good attack led by Collin Fernandez in the 7th minute. The next clear chance for the away side arrived in the 32nd minute as Greig was played behind by Russell Cicerone but his shot was pulled wide. Indy Eleven would respond on the counter in the 40th minute as Ilija Ilic received the ball in the box and Gomez made a great diving save to deny him as the first half finished even at 0-0.

The second half saw the home side continue to control possession and they nearly opened the scoring in the 53rd minute as Tyler Gibson volleyed over the goal following a corner routine. Gomez was then called to make a smart punch to break up a dangerous cross in the 63rd minute as Saint Louis FC looked to maintain their clean sheet. However, Indy would break the deadlock in the 67th minute as Pasher burst down the right side and cut inside the defense to place his shot past Gomez. The STLFC goalkeeper would then be called to make a save on Pasher to deny his near-post effort in the 77th minute. Indy Eleven would score their second of the night in the 81st minute as substitute Dane Kelly boxed out defender Fink to win a bouncing ball and then calmly caught Gomez off his line and chipped the ball into the back of the net. Lewis Hilton would bury a late free kick for his second goal of the season in stoppage time but it would not be enough as Indy Eleven claimed all three points.

“I thought we started well and had some good passages of play in the first half,” said STLFC Head Coach Anthony Pulis. “In the second half, we were flat and couldn’t seem to get going. There are still 36 points to play for and I will make sure we come out fighting next week at Ottawa.” 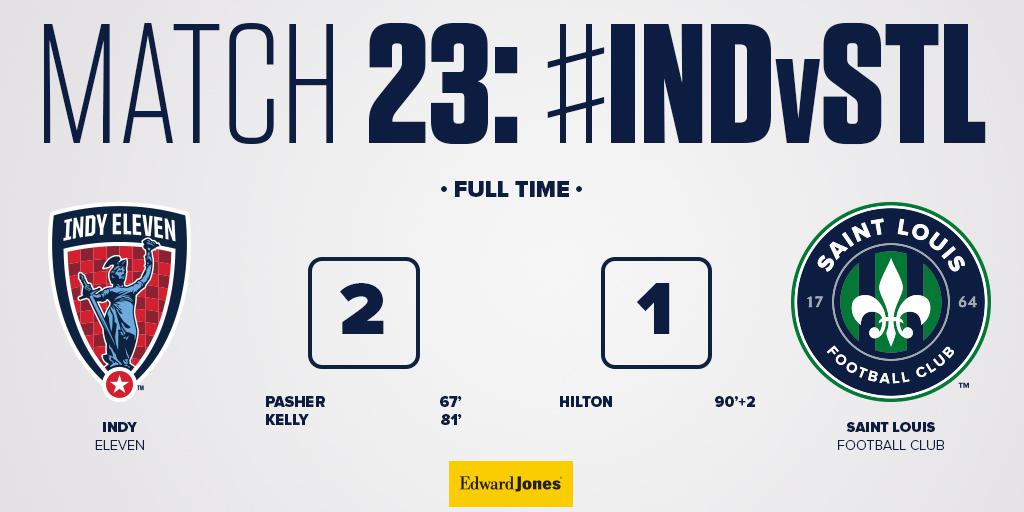