Ottawa opened the scoring through captain Carl Haworth who placed his free kick from 25 yards out into the top right corner in the 10th minute. The home side would then double their lead in the 34th minute as Hadji Barry was in the right place at the right time to finish a deflected effort in the box. Saint Louis FC would play a majority of the second half with 10 men as Oscar Umar was sent off in the 47th minute but were still able to get a goal back from the penalty spot as Sam Fink stepped up to convert in the 71st minute. The comeback effort would come up short, however, as an eighth consecutive loss on the road sees Saint Louis FC fall to 6-9-8 with 26 points while Ottawa Fury FC improves to 10-4-9 with 39 points in the USL Championship Eastern Conference.

Saint Louis FC started the first half strongly as they created opportunities in the first few minutes of the game but it would be Ottawa Fury to strike first as Haworth curled his free kick into the top right corner past a diving Tomas Gomez in the 10th minute. Gomez would then have to come off his line in the 30th minute to deny Christiano Francois in a one-on-one situation but he would be beaten again moments later as Barry volleyed a loose ball in the box into the roof of the net in the 34th minute to see the home side take a 2-0 advantage into the halftime break.

The second half started miserably for Saint Louis FC as they saw Umar dismissed for a second yellow card offense in the 47th minute. Ottawa nearly added to their tally in the 50th minute as Kevin Oliveira saw his effort blocked off the line by Matt Bahner to keep his side in the game. Saint Louis FC was then able to pull one back from the penalty spot in the 71st minute as substitute Kyle Greig was taken down in the box and Fink stepped up to score his sixth goal of the season. However, the push for an equalizer would come up short as Saint Louis FC remain with only two wins on the road all season.

“The first half was the story of our last three months. We are well into the game and then make two individual errors and the opposition punishes us,” said STLFC Head Coach Anthony Pulis. “The performance second half with 10 men was outstanding. The commitment, bravery and work ethic was immense from every single one of them.” 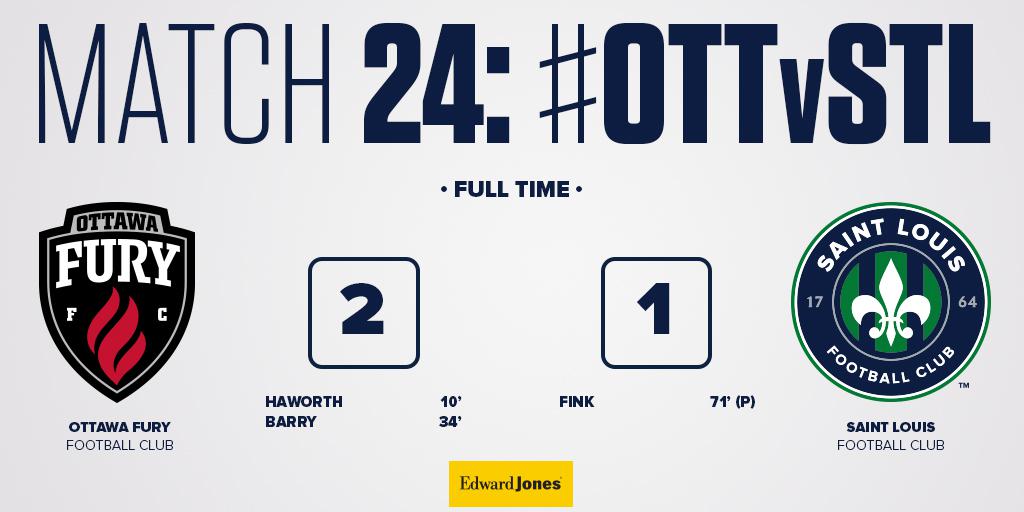