Saint Louis FC opened the scoring in the 16th minute through Kadeem Dacres who hit a rocket into the top corner from outside the box. Hartford would equalize in the 29th minute through a fluke own goal from Sam Fink before retaking the lead in the 38th minute as Kyle Greig found the bottom corner for his sixth goal of the season. Greig would double his tally in the 65th minute as he slid in to get a touch on Matt Bahner’s cross before Hartford pulled one back soon after when Sebastian Dalgaard found the top corner in the 68th minute. Saint Louis FC would see out the win to improve to 7-9-8 with 29 points while Hartford Athletic falls to 5-18-4 with 19 points in the USL Championship Eastern Conference.

The first half saw Saint Louis FC on the front foot with the first chance arriving in the 6th minute as Russell Cicerone took a shot from outside the box that forced Hartford goalkeeper Cody Cropper into a low save. Dacres would then break the deadlock as he received the ball from Collin Fernandez and let loose from about 30-yards out to find the top corner for his third goal of season in the 16th minute. He almost doubled the lead soon afterwards in the 20th minute but his left-footed shot was palmed away from the top corner by Cropper. Hartford would soon equalize as a dangerous long ball played over the top to Alex Dixon was poked by Fink and hit the inside of the post for an own-goal in the 29th minute. Saint Louis FC would regain the lead as Tyler Blackwood won a tackle in the offensive third and Greig latched onto the loose ball and slotted underneath the goalkeeper in the 38th minute to take a 2-1 advantage into the halftime break.

The second half saw Hartford press for an equalizer and they nearly got it in the 50th minute as Wojciech Wojcik was found at the back post with a cross from Danny Barrera but his header flashed wide of the far post. Dacres then had a great effort in the 62nd minute as he settled the ball from Cicerone but his shot went across goal and narrowly wide. Greig would score his second of the night on a poacher’s effort as he was found in the box by Bahner to slide the ball into the back of the net in the 65th minute. Hartford would respond immediately with a goal from former STLFC player Dalgaard in the 68th minute but it would not be enough as Saint Louis FC clinched their first win in six games to make a push for the playoffs.

“Delighted to get the three points, I think that is the most important thing at this stage of the season,” said STLFC Head Coach Anthony Pulis. “I thought we started really well, the first 20 minutes or so we looked bright and we did a lot of things we spoke about this week. From going one up, to conceding the poor [own] goal, I think it was a good reaction from the guys and we went on and responded. We didn’t make life easy for ourselves conceding the second goal, but all-in-all I think it was a deserved victory and the most important thing was earning the three points.” 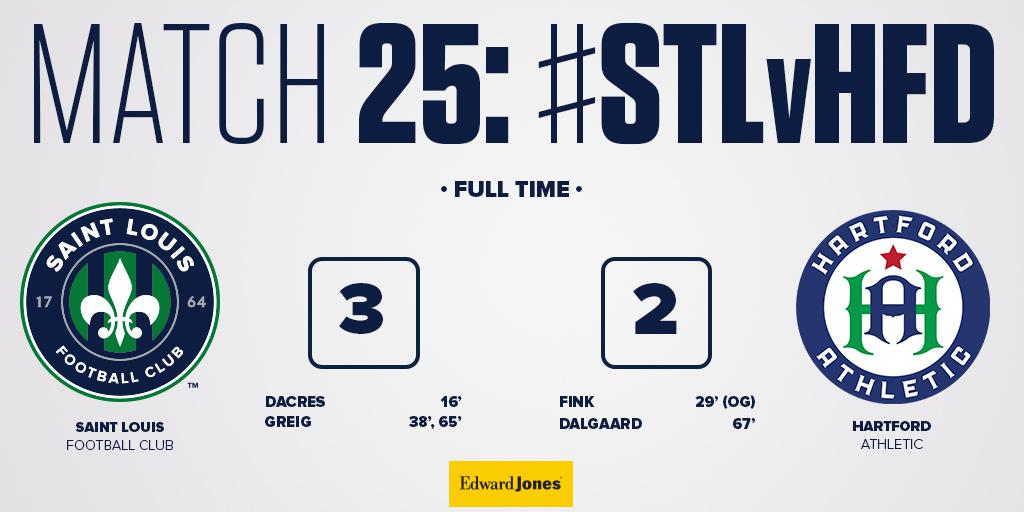