In a rescheduled match that was delayed by local flooding in May, it would be Tyler Blackwood to open the celebratory floodgates as he scored the winner in the 80th minute after being substituted on only five minutes prior. The result sees Saint Louis FC improve to 8-9-8 with 32 points while Ottawa Fury FC falls to 10-6-9 with 39 points in the USL Championship Eastern Conference.

The first half was a mixed bag for both teams as they struggled to break down the respective opponent’s defense. The first chance would arrive for former STLFC player Wal Fall in the 14th minute as he let loose from about 35-yards out but the shot went wide. The first chance for the home side fell to Kadeem Dacres in the 34th minute as he cut inside his defender but his near post shot was saved by Ottawa goalkeeper Callum Irving. The final chance of the half would also come to Dacres in the 45th minute as he dribbled through the defense but his close-range effort was palmed away by Irving as both sides were level at the break.

The second half was more open with the first chance being created by Dacres as he whipped a low cross into the box that found Caleb Calvert but his first-time effort went over the goal in the 51st minute. Dacres then had the best chance of the game in the 61st minute as his shot from the top of the box was saved in the bottom corner by Irving. STLFC goalkeeper Tomas Gomez would then start the move for the goal as he made a routine save and booted the ball for Kyle Greig to head into the path of Blackwood who calmly lifted the ball over the onrushing Irving for his first goal for the club in the 80th minute. Saint Louis FC would withstand a final attack from Ottawa FC to seal their second win in a row for the first time since April and earn all three points to get back into the Eastern Conference playoff positions.

“It’s a massive win, for us to get back-to-back wins is huge,” said STLFC Head Coach Anthony Pulis. “Full credit to the guys, they really ground it out tonight. It was a tough game – it was scrappy, end-to-end – and thankfully Tyler Blackwood comes up with a really good, composed finish. I’m over the moon with the clean sheet which is something we spoke about which we’ve not done enough this year, and hopefully now we can get the guys recovered quickly with another massive one against Nashville [SC] on Saturday.” 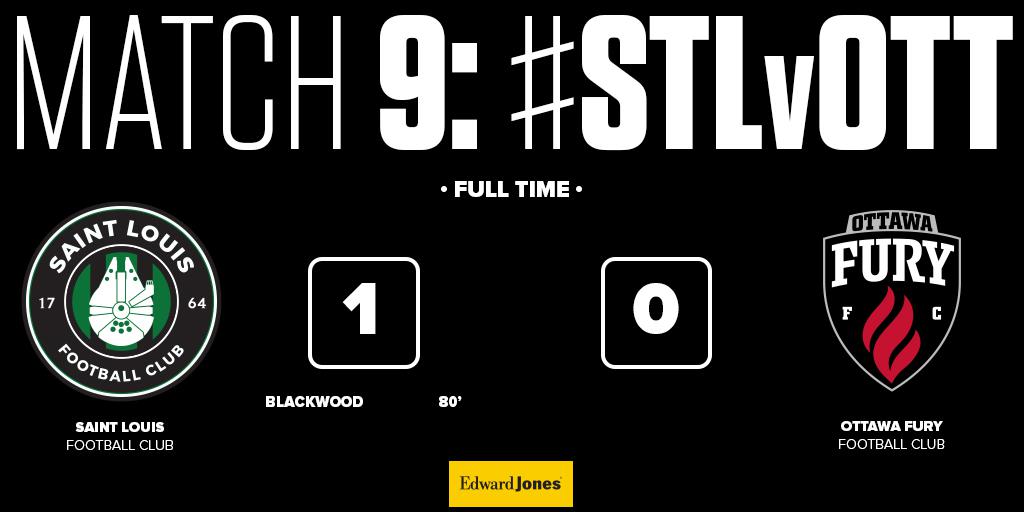