Saint Louis FC scored the lone goal in the 77th minute as Russell Cicerone hit a left-footed effort from outside the box into the bottom corner for his fifth goal of the season. The result sees Saint Louis FC pick up their third win in a row to improve to 9-9-8 with 35 points while Nashville SC falls to 15-7-6 with 51 points in the USL Championship Eastern Conference.

The first half started positively for the home side with the first chance arriving in the 3rd minute as Masta Kacher picked up the ball behind the defense but his shot went wide of the near post. The next chance was created by Caleb Calvert as he hit a low cross into the box to Cicerone but the ball was cleared in the 7th minute. The best chance of the half then came to Kacher in the 40th minute as he was found in space on the left wing by Tyler Blackwood but his shot went just wide of the near post as both sides entered the halftime break level at 0-0.

The second half saw STLFC goalkeeper Jake Fenlason forced into an early save in the 49th minute as he looked to preserve his seventh clean sheet of the season. The next chance fell to Sean Reynolds in the 65th minute as the ball sat up nicely for him on the half-volley but the shot sailed just wide of the top corner. Collin Fernandez then had a great chance in the 74th minute as he dribbled in the top of the box and created space for a shot that looked destined for the top corner but it flew just wide. It would then be Cicerone to break the deadlock as he collected the ball in the midfield and let loose with a low driving shot that beat the Nashville SC goalkeeper and St. Louis-native Matt Pickens in the 77th minute. Nashville SC would press for an equalizer but come up short as Saint Louis FC won their third game in seven days to solidify their spot in the playoff positions heading into a critical game against Birmingham Legion FC next Friday.

“I think the guys performed really well tonight, it was a fantastic performance and three points I felt were deserved,” said STLFC Head Coach Anthony Pulis. “Winning breeds confidence, and the guys are in a good place mentally right now. To perform at that level, to show that amount of energy and enthusiasm and intensity over the whole game was immense. It’s been a great week, and the guys should be proud of themselves and enjoy a couple days off before we prepare for a huge game away against Birmingham [Legion FC].” 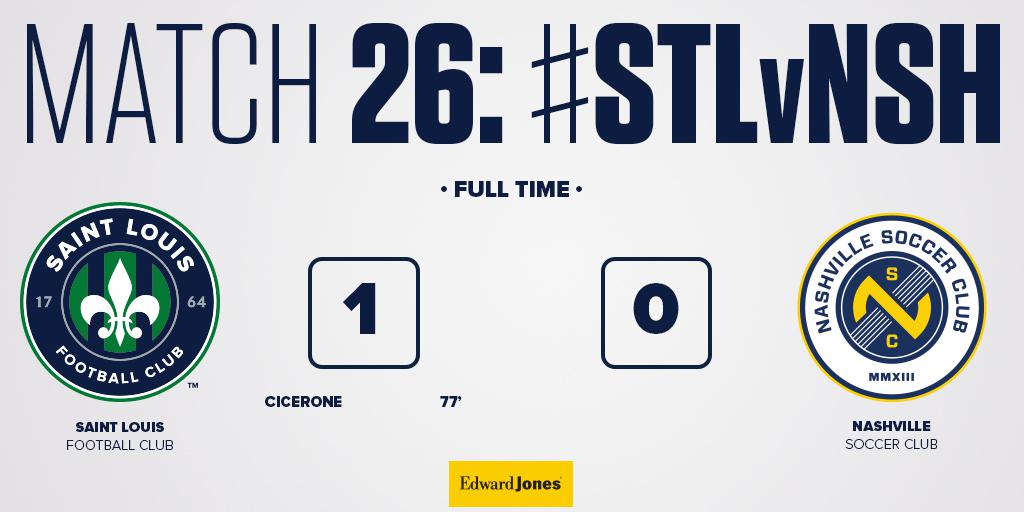