Saint Louis FC opened the scoring just before the halftime break as Tyler Blackwood was found at the back post by Lewis Hilton from a corner kick and his first-time volley nestled in the back of the net in the 42nd minute. He would then double the away side’s advantage in the 72nd minute following a turnover to seal all three points against Birmingham Legion FC who entered the match one place ahead of Saint Louis FC. The result sees Saint Louis FC improve to 10-9-8 with 38 points while Birmingham Legion lost their first game at home since June 1st to fall to 10-11-6 with 36 points in the USL Championship Eastern Conference.

The first half was an open, back-and-forth affair with few clear chances created by either team in the first 20 minutes. The first opportunity fell to Blackwood in the 26th minute as he was found at the top of the box by Kyle Greig but his shot was palmed away from the top corner by Birmingham goalkeeper Matt VanOekel. Birmingham Legion would respond with a shot from distance by Daniel Johnson that flashed wide of the net in the 32nd minute. STLFC would then have a good chance created by Sean Reynolds in the 41st minute as his cross found Blackwood in the box but his header was saved by VanOekel for a corner. The subsequent corner led to the opening goal as Hilton’s deep ball fell to Blackwood to volley into the ground and off the crossbar for his second goal of the season to take a 1-0 lead into the halftime break.

The second half saw more of the same as Saint Louis FC continued to press for goals and Blackwood had a good chance in the 50th minute but was denied at the near post by VanOekel. Blackwood then was picked out on the counterattack by Greig in the 53rd minute but his first-time effort flew past the far post. However, he would not be denied in the 72nd minute as Hilton and Cicerone forced a turnover and picked out Greig to slide the ball across to Blackwood who calmly finished under VanOekel for his second goal of the night and third for the club in four games. Birmingham Legion pressed to get back into the match but Saint Louis FC was able to preserve their third clean sheet and fourth win in a row heading into next Wednesday’s home match against first-placed New York Red Bulls II.

“I thought it was a fantastic road performance tonight,” said STLFC Head Coach Anthony Pulis. “We were really well-organized defensively and extremely dangerous on the counter. The togetherness and work ethic of the guys was off the charts and it’s a huge three points for us.” 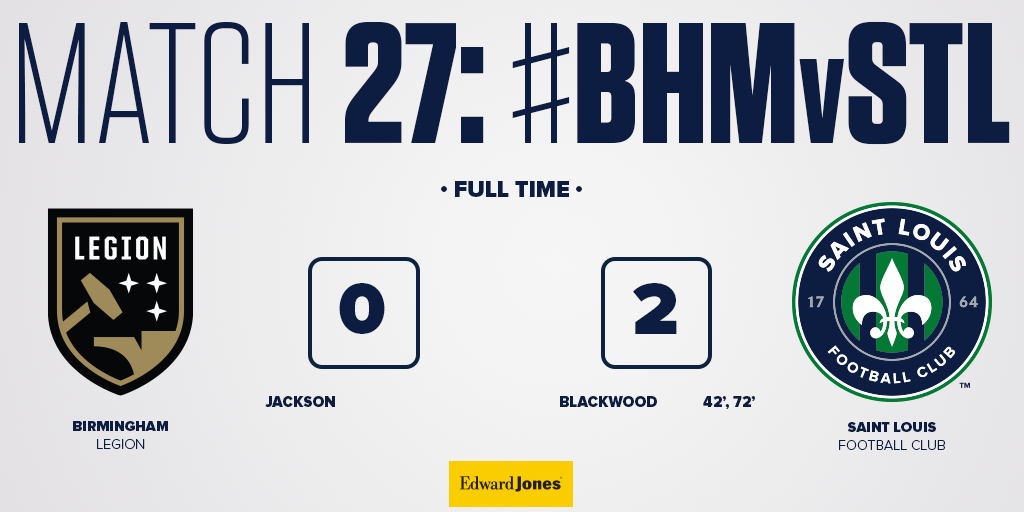