Saint Louis FC got off to a fast start as Tyler Blackwood lunged for a Russell Cicerone cross at the back post to open the scoring in the 3rd minute. Team captain Sam Fink would then step up to convert his seventh goal from the penalty spot in the 70th minute to seal the win and give Saint Louis FC all three points in a crucial match for the final playoff spots. The result sees Saint Louis FC improve to 11-9-8 with 41 points while New York Red Bulls II fall to 17-7-5 with 56 points in the USL Championship Eastern Conference.

The first half saw Saint Louis FC create a majority of the chances even though the possession stats favored the visitors. They would open the scoring in the 3rd minute as Cicerone was found in space on the left and his cross to the back post was turned in by Blackwood for his fourth goal in four games. The next chance then fell to Kyle Greig in the 28th minute as he received the ball from Cicerone in the box and his shot on the turn went narrowly wide of the far post. The next chance was also created by Cicerone as he picked out Lewis Hilton at the top of the box but his shot went high of the net in the 40th minute to see the home side up 1-0 at the break.

The second half saw more of the same as the Saint Louis FC defense continued to stifle the NYRBII team and create chances on the other end. The first chance was created by Blackwood as he burst down the left and picked out Cicerone but his shot was blocked out for a corner in the 50th minute. Tomas Gomez was then called into action in the 61st minute as Jared Stroud hit a low shot to the bottom corner that was collected by the STLFC goalkeeper to preserve his fifth clean sheet of the season. The home side then had multiple chances to double their advantage in the 62nd minute as a barrage of shots from various players were saved by Louro with the final shot from Hilton hitting the post. However, Saint Louis FC would breakthrough thanks to a penalty earned by Masta Kacher which was converted by Fink in the 70th minute for his team-tying seventh goal of the season. New York would continue to press but could not find a goal as the game finished 2-0 to mark a club-record fifth win in a row.

“It was a fantastic result, I think you have to give credit to [New York] Red Bulls II as they present challenges that no one else does in this league,” said STLFC Head Coach Anthony Pulis. “The only negative for me is we didn’t get more goals to help our goal differential, but another clean sheet and to beat the top of the table team is a fantastic result. I’m just really proud of the guys because what they put in [the performance] was immense.” 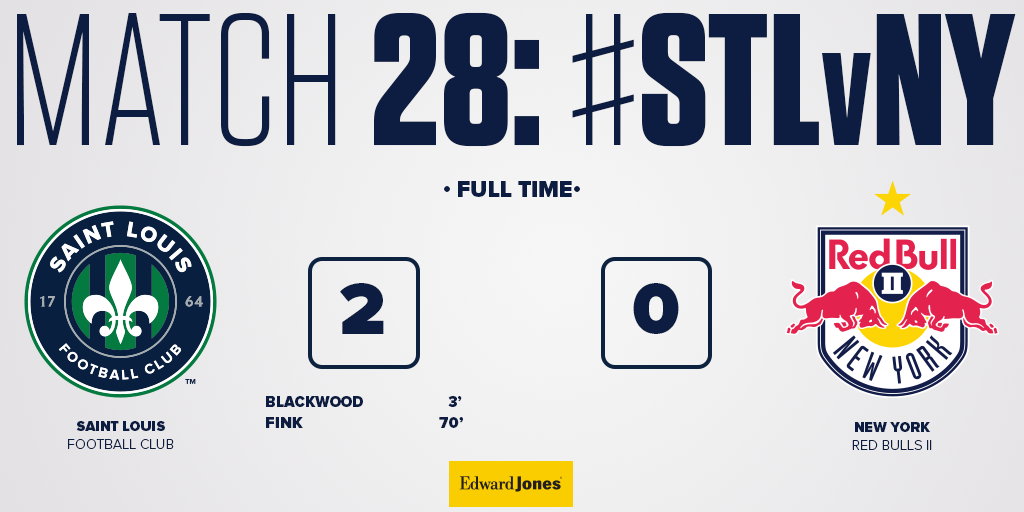