MEMPHIS, Tn. – Saint Louis FC fell 1-0 away to Memphis 901 FC in front of 6,701 fans at AutoZone Park to break the club’s five-game win streak in Match 29 of the USL Championship regular season.

Memphis 901 FC scored the lone goal from a corner kick in the 54th minute as Marcus Epps was found at the near post to score his first goal for the club. The result sees Saint Louis FC fall to 11-10-8 with 41 points while Memphis 901 FC improves to 8-13-7 with 31 points in the USL Championship Eastern Conference.

The first half was a back-and-forth affair with neither side creating many clear opportunities. The first chance would come to the away side in the 12th minute as Paris Gee found Russell Cicerone with a cross in the box but his header flashed over the net. Cicerone would have the next two chances as he took some speculative shots from outside the box in the 16th and 23rd minutes but both went wide of the target. Memphis would respond through Pierre da Silva in the 38th minute as he charged into the area but his shot sailed over the goal. The final chance of the first half came from Caleb Calvert as he received a long throw-in and his shot from outside the box on the half-volley flew over the net in the 45th minute to see both sides level at the break.

The second half saw more of the same as the STLFC defense limited the clear chances for Memphis until the 54th minute as Cameron Lindley picked out Epps at the near post with a corner kick and his header flashed by STLFC goalkeeper Jake Fenlason to break the club's clean sheet streak at four games. Substitute Lewis Hilton would then nearly make an immediate impact as his free kick in the 66th minute was palmed away from the bottom corner by Memphis goalkeeper Jeff Caldwell. The final chance for Saint Louis FC to equalize came in the 76th minute as Cicerone found Collin Fernandez at the top of the box but his first-time effort was collected by Caldwell and Memphis would hold on for their fifth win in a row to break Saint Louis FC’s club-record streak at five wins.

“Ultimately the game has been decided on a restart where we don’t do our jobs properly,” said STLFC Head Coach Anthony Pulis. “I was disappointed with the first half display. The second half was an improvement but we didn’t show enough killer instinct to capitalize on the chances.” 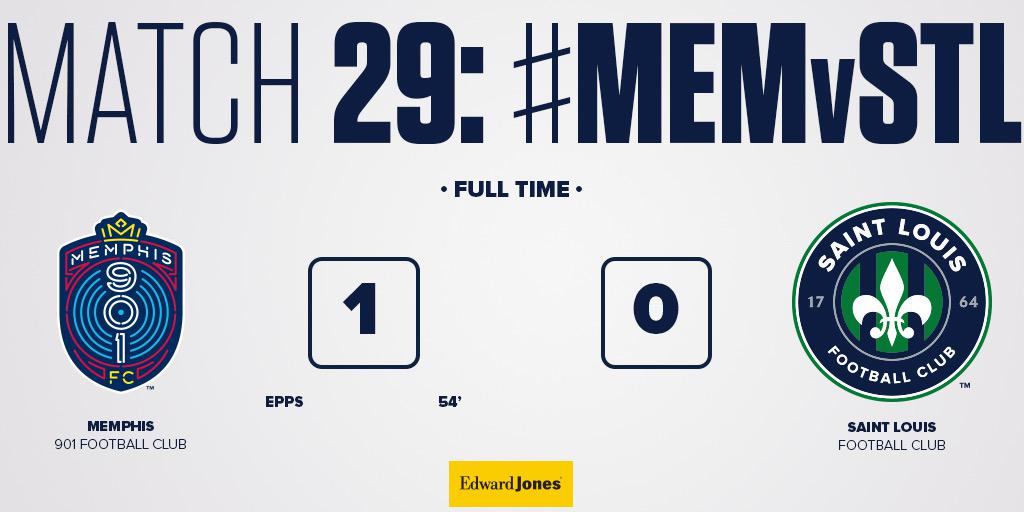