Saint Louis FC opened the scoring in the 67th minute through Tyler Blackwood as he turned in Bradley Kamdem Fewo’s cross at the back post for his fifth goal for the club and sixth overall this season after signing from Sacramento Republic in August. Atlanta United 2 would equalize soon after in the 72nd minute as substitute Amir Bashti found the top corner from the top of the box for his first goal of the season. The result sees Saint Louis FC move to 11-10-9 with 42 points while Atlanta United 2 improves to 8-16-7 with 31 points in the USL Championship Eastern Conference.

The first half got off quickly for the home side as they created a majority of the scoring chances early with the first arriving in the 8th minute as Lewis Hilton had an effort from outside the box go narrowly wide. Phanuel Kavita then had a great chance to open the scoring in the 13th minute as he rose to meet Matt Bahner’s cross but his header flashed over the net. Kavita almost redeemed himself immediately as he was found at the back post but his volley trickled wide of the far post in the 14th minute. Atlanta’s only opportunities came from distance as Patrick Okonkwo and George Bello took shots from outside the box that went wide as the first half finished level at 0-0.

The second half saw Atlanta United 2 grow more into the game and they had a chance in the 48th minute as Wesly Decas picked up a rebound from a blocked shot and let loose from outside the box but the shot went wide. The home side would respond through Kyle Greig as he took a shot from the top of the box after a turnover forced by Kamdem Fewo but his shot was collected by Atlanta United 2 goalkeeper Dylan Castanheira in the 54th minute. Saint Louis FC would finally make the breakthrough in the 67th minute as Kamdem Fewo put a pinpoint cross to the back post and Blackwood rose to volley in first-time. Atlanta equalized almost immediately, however, as Bashti turned and hit a bouncing pass on the half-volley into the top corner past STLFC goalkeeper Tomas Gomez in the 72nd minute. The final clear chance of the game would fall to substitute Masta Kacher in the 86th minute as he bent a rocket from distance that was palmed by Castanheira onto the crossbar to see the game finish at 1-1.

“I’m frustrated, just because of the chances we created,” said STLFC Head Coach Anthony Pulis. “I don’t think our play was fantastic, but I think we had at least six clear-cut opportunities and you can’t miss the chances we created tonight and win a game of football, it’s as simple as that. It’s two points dropped, but it’s not the end of the road because we’re still in a decent position and have four games left with lots to play for.” 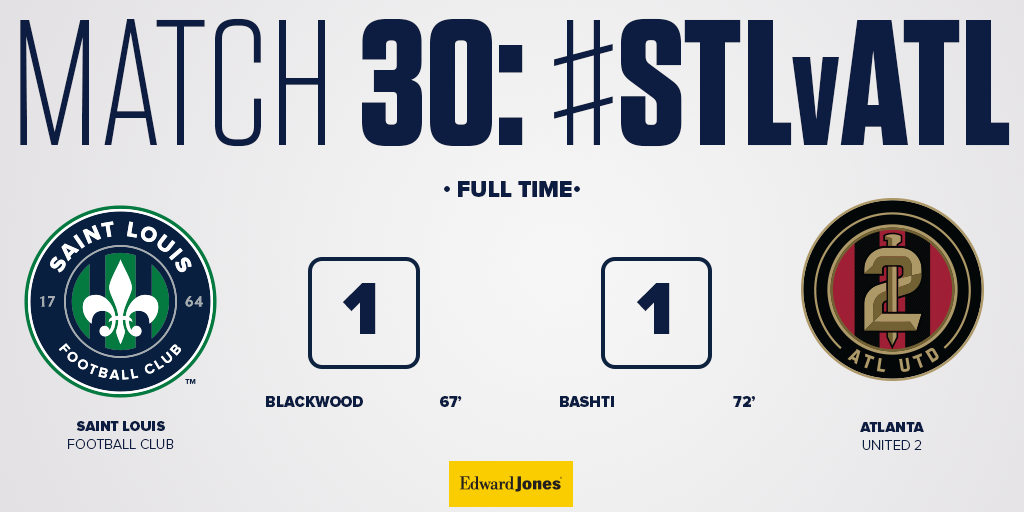