Louisville City opening the scoring through team-leading goal scorer Magnus Rasmussen who notched his 11th goal of the season in the 12th minute. Saint Louis FC would create a couple of great opportunities to equalize in the second half but Louisville goalkeeper Chris Hubbard made some incredible saves to keep the game at 1-0. The result sees Saint Louis FC fall to 11-11-9 and remain on 42 points while Louisville City FC improves to 15-7-9 with 54 points in the USL Championship Eastern Conference.

The first half saw Louisville City control possession and create a majority of the chances with the first coming in the 12th minute as STLFC goalkeeper Tomas Gomez collected a low cross from Oscar Jimenez to break up a quick attack. Louisville City would score the opening goal soon after, however, as Rasmussen received the ball at the top of the box and let loose with a driving shot to the bottom right corner. STLFC would respond through Bradley Kamdem Fewo who burst down the left flank and took a shot at the near post but found the side-netting in the 24th minute. Tyler Blackwood would then have a chance in the 29th minute as he received a great long pass from Oscar Umar and cut inside his defender to fire away a shot but it was saved by Hubbard. Louisville would create all the chances to close out the half with the first in the 32nd minute as Paco Craig was found in the box from a free kick and his header crashed off the crossbar and out for a goal kick. The next chance fell to Devon Williams who was found alone in front of the goal with a cross but his header trickled wide in the 40th minute. The final chance of the half was stopped by Gomez who made a charging save on Brian Ownby in a one-on-one situation to keep the deficit at 1-0 heading into the halftime break.

The second half saw more attacking momentum from Saint Louis FC with a chance created in the 55th minute as Blackwood picked out Kyle Greig with a low cross but his first-time effort went wide. Phanuel Kavita then did everything in his power to stop a second Louisville goal as his perfectly timed challenge on the goal line prevented Ownby from scoring in the 71st minute. Perhaps the best chance to equalize then came in the 76th minute as substitute Masta Kacher picked out Blackwood with a cross and his downward header was palmed away from the bottom corner by Hubbard in the 76th minute. The final chance would come in stoppage time as former Louisville City player and substitute Guy Abend had a diving header saved by Hubbard to see the game finish at 1-0.

“I thought first half we showed them too much respect,” said STLFC Head Coach Anthony Pulis. “We just looked flat, we were off it which is unlike us, and we had to make some tactical adjustments but ultimately, shape and tactics aren’t everything. Give Louisville [City FC] credit, they played some fantastic football and they showed why they are back-to-back champions. I think tonight is a good lesson for us regarding our mindset and mentality going into games, but ultimately give credit to them because I’m amazed they are not higher in the league because at times I think they were the best team we’ve seen this year. We’ll learn from it, we’ll get the guys back on Monday and prepare for Loudoun [United FC] on Wednesday.” 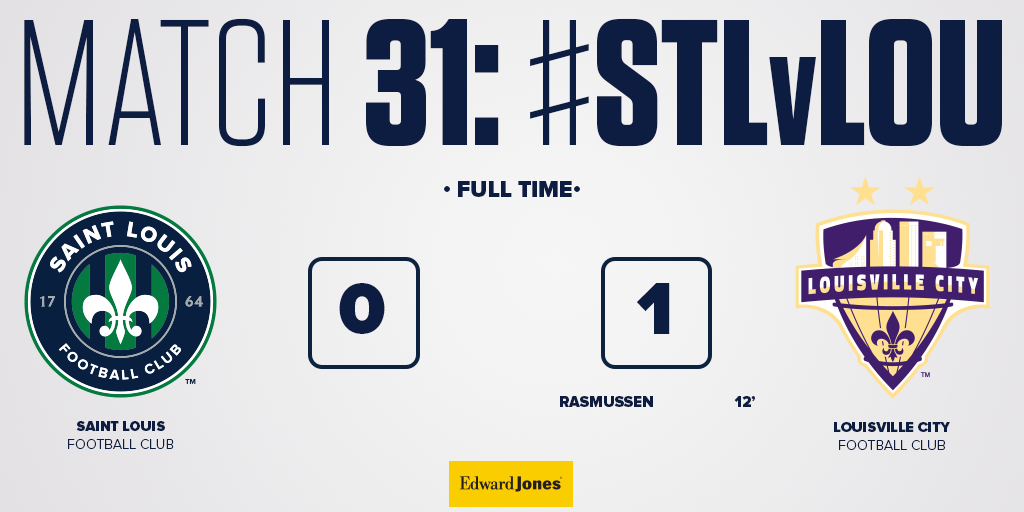