LEESBURG, Va. – Saint Louis FC fell 4-3 on the road against Loudoun United FC in front of 631 fans at Segra Field in Match 32 of the USL Championship regular season.

Saint Louis FC opened the scoring in the first half through a Lewis Hilton free kick that was placed in the top corner in the 35th minute. The second half would see a barrage of goals traded by both teams as Loudoun equalized in the 47th minute through Alioune Ndour before taking the lead in the 60th minute as Kyle Murphy scored his 11th goal of the season. Saint Louis FC would storm back as Tyler Blackwood scored in the 63rd minute before Hilton added his second of the night to take a 3-2 lead in the 67th minute. However, Loudoun would equalize in the 80th minute as Antonio Bustamante finished from close-range and then score the winner through Elvis Amoh in stoppage time to steal all three points. The result sees Saint Louis FC fall to 11-12-9 and remain on 42 points while Loudoun United FC improves to 9-17-6 with 33 points in the USL Championship Eastern Conference.

The first half saw Saint Louis FC create most of the chances with the first arriving in the 3rd minute as Blackwood got on the end of a long pass from Sean Reynolds but his shot hit the side netting. Blackwood would have the next chance as he beat his defender on the end line but his shot at the near post from point-blank range was saved by Loudoun goalkeeper Earl Edwards Jr. in the 11th minute. Loudoun would respond through Gordon Wild who had a strong shot saved by STLFC goalkeeper Tomas Gomez in the 23rd minute. Saint Louis FC would break the deadlock in the 35th minute through Hilton as he earned a free kick at the edge of the box and stepped up to bury it in the top corner for his third goal of the season to take a 1-0 lead into the halftime break.

It would be a tale of two halves as Loudoun came out strongly to immediately equalize in the 47th minute as Ndour was found at the back post to head in his second goal of the season. Gomez was then called to make a low diving save in the 50th minute before Kadeem Dacres went down the other end and had his shot palmed out from the bottom corner in the 52nd minute. Loudoun would take the lead through team-leading goal scorer Murphy as he dribbled through the defense and curled the ball into the far post in the 60th minute. That would bring the away side to life as Blackwood scored the equalizer in the 63rd minute for his seventh goal of the season and then he picked out compatriot Hilton on the edge of the box to score his second of the night in the 67th minute to take a 3-2 lead. Just as Saint Louis FC looked destined for a critical three points in the playoff race, Loudoun would score the equalizer with a powerful shot off the crossbar from Bustamante in the 80th minute to make it 3-3. Both sides pressed for the winner and it would be Loudoun to claim it with virtually the last kick of the game as Amoh finished from close-range to claim all three points and dent Saint Louis FC’s playoff positioning with only two games remaining.

“The fact that we scored three goals on the road and lost the game is unacceptable,” said STLFC Head Coach Anthony Pulis. “We looked really dangerous going forward tonight and could’ve had more goals but mental lapses and an inability to do the basics of defending has cost us.” 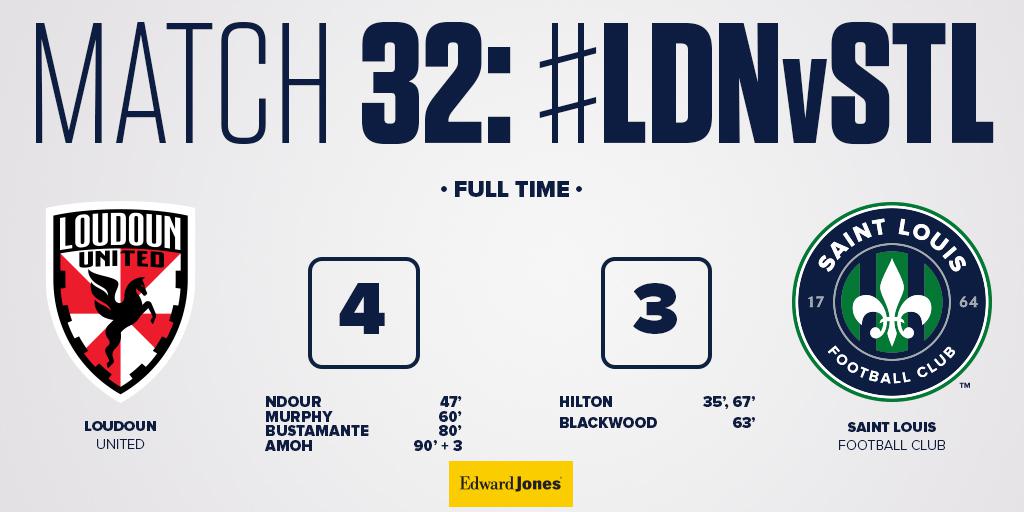