RALEIGH, NC – Saint Louis FC ended their 2019 season with a 1-0 loss away to North Carolina FC in front of 5,982 fans at WakeMed Soccer Park in Match 34 of the USL Championship regular season.

North Carolina FC scored the winning goal in the 90th minute through St. Louis-native Robbie Kristo to claim all three points and knock Saint Louis FC out of playoff contention. The result sees Saint Louis FC finish the season with a 11-14-9 record and 42 points while North Carolina FC improves to 16-10-8 with 56 points in the USL Championship Eastern Conference.

The first half saw few chances created for either side as Saint Louis FC entered the game knowing a win would be needed in order to have a chance to make the playoffs. The first chance arrived in the 29th minute as STLFC goalkeeper Tomas Gomez was called to make a point-blank save on Marios Lomis at the near post. The next chance then fell to Steven Miller in the 35th minute as his shot from the top of the box just trickled wide of the far post. The final opportunity of the first half came from the last kick as Dre Fortune hit the ball on the volley and Gomez was there to tip the shot over the net in first half stoppage time to see both sides level at the break.

The second half saw Saint Louis FC put on the pressure but North Carolina would create the first scoring opportunity as Gomez made another strong save and collected the ball on the goal line in the 49th minute. The best chances for the away side would come soon after as Phanuel Kavita had a free header flash over the goal in the 52nd minute before Bradley Kamdem Fewo had a shot at close-range saved by North Carolina goalkeeper Alex Tambakis in the 55th minute. North Carolina FC would respond with a shot from Miller that Gomez handled comfortably in the 74th minute before he would make another good reflex save on a deflected effort after a two-on-one situation in the 86th minute. North Carolina FC would steal the win right before stoppage time, however, as substitute Kristo got on the end of a free kick to head past his former club teammate Gomez in the 90th minute to end Saint Louis FC’s playoff hopes and seal their 7th place finish in the Eastern Conference to host either Birmingham Legion FC or Charleston Battery in the USL Championship Playoffs play-in game on Wednesday.

“Disappointing end to a rollercoaster of a season,” said STLFC Head Coach Anthony Pulis. “There’s been far too many games where we’ve thrown points away because of our own doing, tonight included. A period of reflection now needs to take place and we will see how we all move forward from here.” 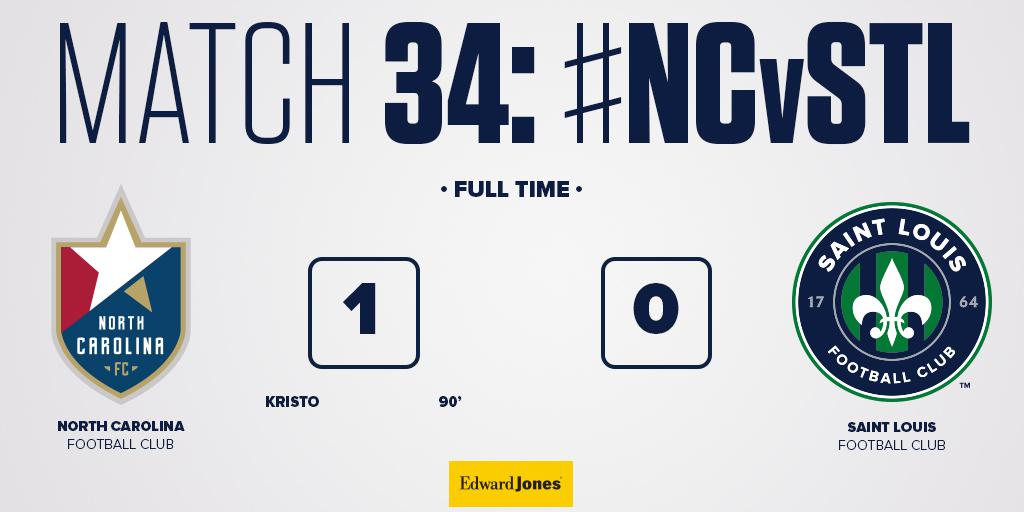