ST. LOUIS, Mo. – Saint Louis FC announced the return of nine players from the 2019 campaign who are under contract for the 2020 USL Championship season. All other players from last season are out of contract, with the exception of Oscar Umar.  An announcement regarding Umar’s status will follow in the coming days.

The players under contract by position for the 2020 USL Championship season include:

Kadeem Dacres, Kyle Greig and Phanuel Kavita will be the first players in club history to have played for the club in three consecutive seasons, excluding Seth Rudolph who joined midway through the 2018 campaign after playing for the club during the 2016-2017 seasons. Dacres and Greig have signed new contracts pending league and federation approval.

Paris Gee made 19 appearances in the league last season with 1,176 minutes played. He completed 73.5% of his passes with 10 key passes and one assist which leveled the away match against Swope Park Rangers.

Phanuel Kavita was one of two outfield players to play in every minute of the USL Championship regular season in 2019. He anchored a defense that kept 12 clean sheets and led the team in blocks with 28 this season. Kavita also scored one goal in the 2-1 win against Indy Eleven and completed 86.5% of his passes throughout the course of the season.

Guy Abend played 1,287 minutes over 19 games during the 2019 season which was limited due to injury. He completed 498 passes with a 70% accuracy in the opposition half as he contributed one assist during the season. Abend also scored two goals in the U.S. Open Cup, including a memorable header against Chicago Fire which proved to be the winner in the Third Round.

Russell Cicerone played 2,538 minutes over 33 games during a breakout year for the attacking midfielder. He created the second-most chances with 41 key passes and led the team in crosses with 64 over the course of the season. Cicerone scored five goals in the USL Championship and one goal in the U.S. Open Cup, including the game-winners against Indy Eleven and Nashville SC.

Kadeem Dacres played a career-high 2,214 minutes across 33 games in his second season at the club. He scored four goals during the season and completed 71.9% of his passes, including 16 key passes.

Joaquin Rivas was limited to 392 minutes over six appearances as he had successful knee surgery in the middle of the season to rule him out for the remainder of the campaign. He was able to contribute the game-winning assist on the road against Nashville SC and scored one goal at home against Birmingham Legion. Rivas also provided seven key passes during his six appearances and completed 73.6% of his passes in the opposition half.

Former STLFC Academy player Nikiphoros Vlastos returns after signing a professional contract in July 2019. He made his professional debut in the U.S. Open Cup against Des Moines Menace where he played all 120+ minutes in the penalty shootout win. Vlastos then made his debut in the USL Championship against Charlotte Independence as he played 16 minutes and completed 17 of 19 passes with one key pass as a substitute. In total, he played 88 minutes over three appearances in the league and completed 89.5% of his passes with two key chances created.

Tyler Blackwood returns after joining the club in August 2019 from Sacramento Republic FC. He played 1,810 minutes across 26 appearances between both clubs and scored seven goals, including six for Saint Louis FC after his signing. Blackwood also created 25 chances with two assists during the 2019 campaign.

Kyle Greig played 2,146 minutes over 31 appearances as he led the attack which created 40 goals last season. He scored seven of those goals, all from open play, with a 306 minute-per-goal ratio which was third-best on the team. Greig also provided four assists with 28 key passes over the course of the season. 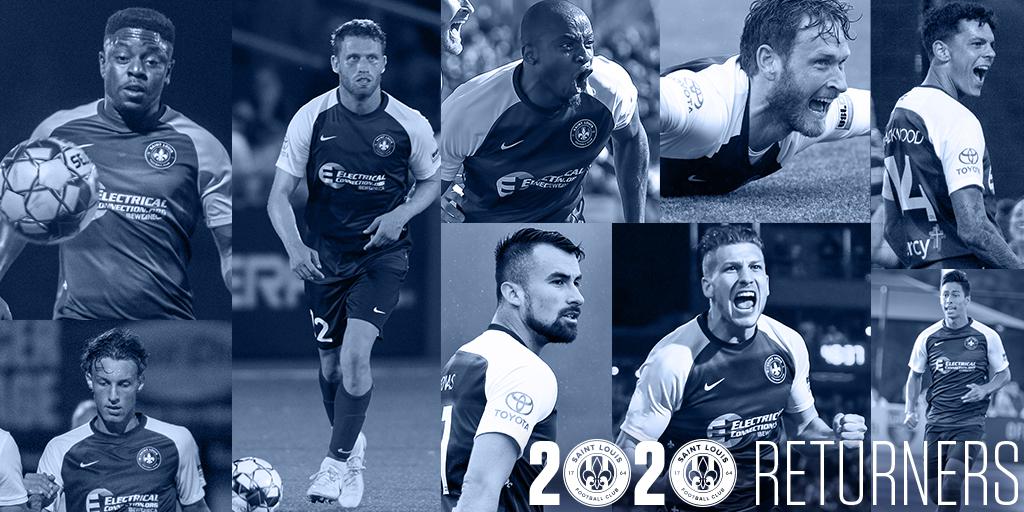