ST. LOUIS, Mo. – The USL Championship announced the 2020 season home openers for all 35 clubs today which will see Saint Louis FC host The Miami FC during the first weekend of the season on Saturday, March 7th at 7:00 p.m. CT.

This will mark the second year in a row that Saint Louis FC has opened the season at home. The club defeated Indy Eleven 2-1 in front of 4,561 fans in 2019 and is currently undefeated in home openers with a 3-0-3 record. Saint Louis FC was 8-3-6 with 25 goals scored and only 16 goals conceded across the 17 home games in 2019. Over the last two seasons, the club has boasted a 18-5-11 record at home with 48 goals scored and only 27 goals conceded.

The home opener will also be the debut match for The Miami FC in the USL Championship after competing in the National Independent Soccer Association (NISA) in 2019. The team went undefeated in the Fall 2019 NISA season and won the NISA East Coast Championship before acquiring Ottawa Fury FC’s franchise rights to join the USL Championship. The team is coached by former U.S. Men’s National Team player Nelson Vargas who will begin his first season in charge after serving as an assistant during the 2018-2019 seasons. The Miami FC also recently announced the signing of Jamaican international forward Romario Williams who made seven appearances with one goal scored for Columbus Crew SC in MLS and another five appearances with three goals for Atlanta United 2 in the USL Championship during 2019. Former STLFC goalkeeper and St. Louis-native Mark Pais, who made 29 appearances for the club during the 2015-2016 seasons, will make his homecoming as he currently plays for The Miami FC.

Single-game tickets for all 2020 home games will go on sale before the end of the month. Don’t miss a moment with season tickets for all 17 regular season games starting as low as $221. Group reservations can also be placed for any home game to secure group experiences. Contact the ticket office at 636-680-0997 or email tickets@saintlouisfc.com for more information. 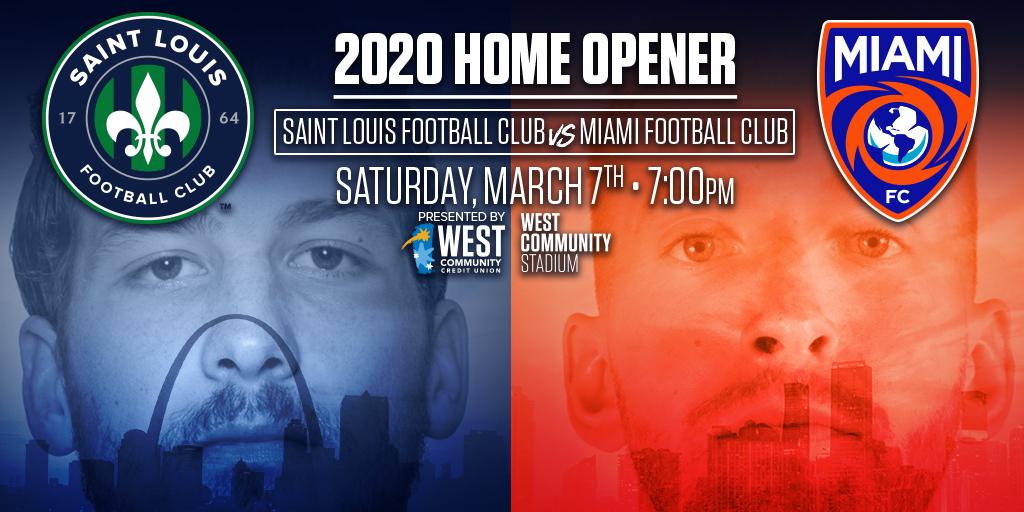