Saint Louis FC opened the scoring in the 15th minute as Kyle Greig got on the end of a corner kick to head past Memphis goalkeeper Jimmy Hague. The lead would be doubled in the 56th minute as two Academy trialists connected for an easy tap-in at the back post before Memphis 901 FC got one back as Marc Burch scored directly from a free kick in the 64th minute. The game would finish 2-1 and Saint Louis FC will continue their preseason against Indy Eleven and FC Tulsa next week.

The first half saw both sides look to establish a shape and possession and it would be Memphis to shoot first in the 4th minute as Duane Muckette got on the end of a bouncing ball and his volley was parried away by STLFC goalkeeper Kyle Morton. Saint Louis FC would respond with a good attack down the left side by an Academy trialist who earned a corner kick which was taken by Kadeem Dacres and headed in by Greig over Hague in the 15th minute. The next chance fell to an Academy trialist as Richard Bryan found him at the back post but his first-time volley found the side netting in the 26th minute and Saint Louis FC would maintain their 1-0 lead going into the break.

The second half saw Saint Louis FC make wholesale changes while Memphis 901 FC remained unchanged and the home side would score another goal through two Academy trialists in the 56th minute. Memphis would respond with a goal from Burch that bent around the wall and beat a diving John Berner who would be injured during the play and subsequently subbed off. The final clear chance fell to Russell Cicerone in the 85th minute as he beat his defended for a one-on-one with Memphis goalkeeper Jim Barkei but his shot trickled wide and the game would finish 2-1.

“It’s our first game and it’s preseason so you can take it with a grain of salt but it exceeded my expectations,” said STLFC Head Coach Steve Trittschuh. “We did things that we worked on in training that I really liked. We still have things to work on, and the guys are still getting to know each other, but overall I’m happy with the performance.” 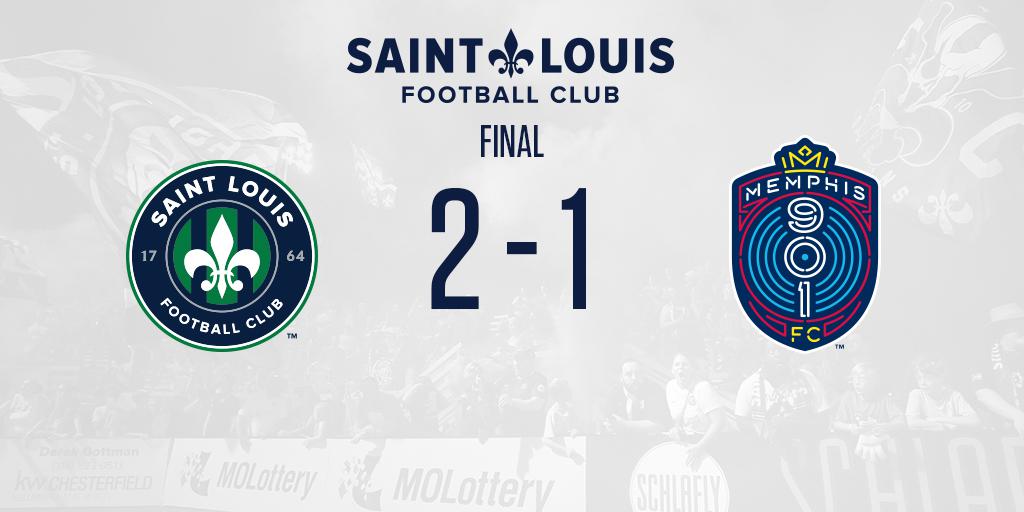