ST. LOUIS, Mo. – Saint Louis FC won 5-0 against Young Harris College at West Community Stadium in the fourth game of the 2020 preseason. The club will host Forward Madison FC in the final preseason game on Saturday, February 29th at 3:00 p.m. CT with $5 admission.

Saint Louis FC opened the scoring in the 7th minute as Tyler Blackwood made a long run down the left side and calmly slotted the ball underneath Young Harris College goalkeeper Eduardo D’Avino. Russell Cicerone would then score in the 38th minute before adding another just before halftime to make it 3-0 at the break. Joaquin Rivas would score his first goal of preseason in the 79th minute with a finish from close-range before Richard Bryan hit a cross that sailed over the goalkeeper and inside the far post to make it 5-0. The win sees Saint Louis FC improve to 2-1-1 in the 2020 preseason.

The first half got off to a good start as Blackwood had the freedom of the left side to dribble at the goalkeeper and finish in the 7th minute. There was another period of pressure in the 17th minute as Paris Gee crossed to Blackwood in the box who saw his shot saved and the follow-up from Wal Fall was also palmed away by the Young Harris goalkeeper. Kadeem Dacres created the next chance as he found Blackwood in the box but his shot was deflected out for a corner in the 37th minute. Cicerone would then double the lead in the 38th minute as he cut inside his defender on the left and curled the ball into the far post before adding another as he dribbled through the heart of the defense and made it 3-0 going into halftime.

The second half saw Saint Louis FC make some changes and it would be substitute Rivas to add to the score line as he finished from close-range in the 79th minute. Bryan, another second half substitute, would add the final goal in the 83rd minute as his cross confused the goalkeeper and went in off the far post to see the game finish 5-0.

“I gave the guys some specific instructions and one of those things was to not give up any goals today so we executed fantastically well,” said Head Coach Steve Trittschuh. “To score five goals today and not give up any, plus to do some of things we have been working on, it was a good game for us. [Young Harris College] did not stop after the score was 3-0 at half when they easily could have packed it up, they kept giving us a game so credit to them, and it was a great exercise for us.” 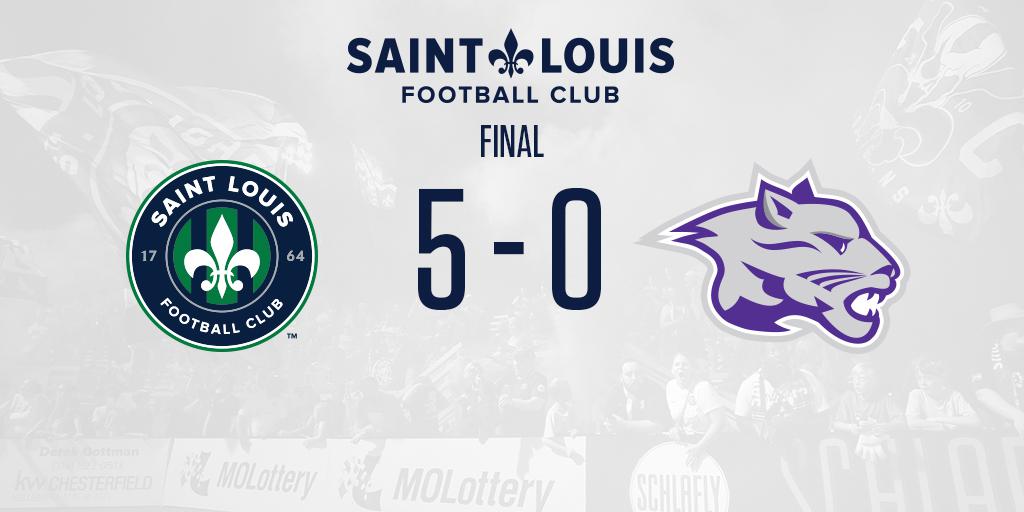