Saint Louis FC opened the scoring in the 10th minute through Kyle Greig as he latched onto a poor pass from the defense and rounded the goalkeeper for his first goal of the season. The advantage would be doubled in the 21st minute as Russell Cicerone buried an indirect free kick inside the penalty area before Miami pulled one back from the penalty spot through Romario Williams in the 45th minute. Saint Louis FC would put the game away with a goal from substitute Tyler Blackwood in the 77th minute before sealing the win with another goal from Cicerone in stoppage time to see the game finish 4-1.

The first half started well for Saint Louis FC as they nearly scored in the 5th minute as Greig laid off the ball to Cicerone but his shot was saved by Miami goalkeeper Brian Sylvestre. Greig would break the deadlock in the 10th minute as he collected the ball from a poor Miami back pass and dribbled around the goalkeeper before calmly finishing to open his account for the season. Paris Gee would have a few chances and his shot destined for the top corner had to be palmed away by Sylvestre in the 18th minute. Cicerone would then double the lead from an indirect free kick that was laid off by Todd Wharton and hammered into the net in the 21st minute. Prince Saydee would draw a penalty just before halftime and Williams would step up to convert in the 45th minute to make the score 2-1 at the break.

The second half saw Miami press for an equalizer and STLFC goalkeeper Kyle Morton was called to make a double save in the 47th minute. STLFC would respond with a Greig chance as Mour Samb found him in the box but his header flashed wide in the 56th minute. Greig was then replaced by Blackwood in the 76th minute and he would score within his first five touches of the ball in the 77th minute as he was played behind the defense and curled his shot around the goalkeeper. It would be another substitute to make an impact as Joaquin Rivas laid off a ball to Cicerone to finish in stoppage time to seal the 4-1 victory.

“We have been talking about starting quickly all week and we wanted to get on top of them,” said STLFC Head Coach Steve Trittschuh. “We know they are a new team and maybe they are not settled so it was very important to have that first 10-15 minutes to get at them. It’s early and they are a new team, but so are we in a way, and we’ve come together so if we can keep playing like that it will be fantastic.” 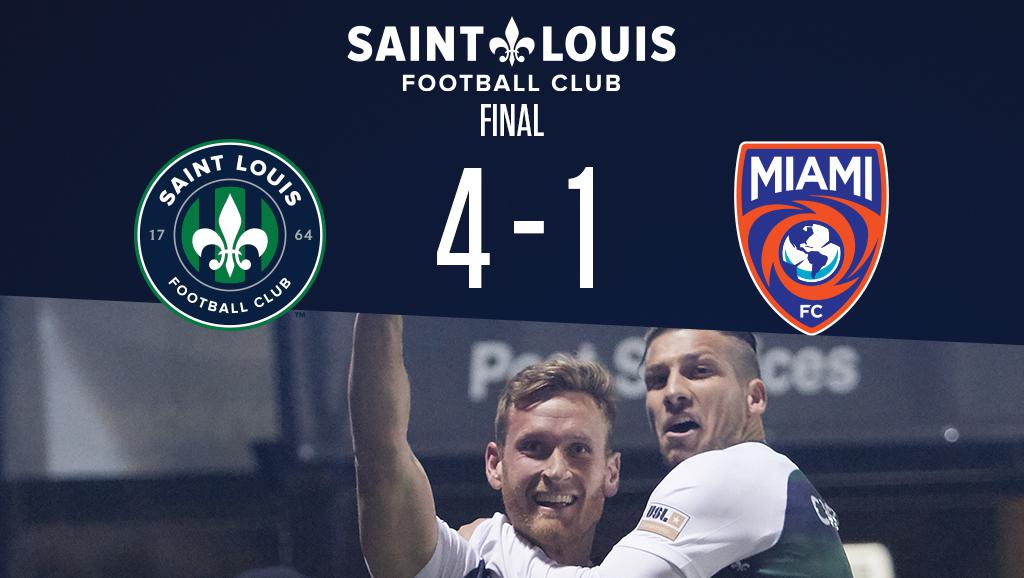