Saint Louis FC scored the lone goal in the 24th minute as Tyler Blackwood was played behind the defense by Wal Fall and finished first-time for his third goal of the season. The team was able to withstand the pressure from the away side to improve to 3-1-0 with 9 points while Indy Eleven loses their first game to go to 4-1-0 with 12 points in Group E of the USL Championship.

The first half saw Indy Eleven create the early chances as STLFC goalkeeper Kyle Morton was called to make a couple saves on shots from Andrew Carleton in the 13th and 16th minutes. Saint Louis FC would then break the deadlock as Fall played a lovely weighted through ball for Blackwood to hit first-time with his left foot into the bottom corner in the 24th minute. Carleton would take another shot from outside the box in first half stoppage time that was routinely saved by Morton to see STLFC maintain the 1-0 advantage at the break.

The second half was more of the same as Indy continued to take shots from distance while Morton and the rest of the STLFC defense stood strong. In the 61st minute, Blackwood played a one-two pass with Russell Cicerone and then found him with a cross in the box but Cicerone could not get enough on the ball with his trailing leg to trouble Indy goalkeeper Evan Newton. The next chance arrived for Indy substitute Tyler Pasher as he found space in the box but Phanuel Kavita closed him down to block a close-range shot in the 77th minute. Indy continued to put the pressure on but Saint Louis FC was able to see out the win for a massive three points in Group E.

“I knew it wasn’t going to be a fast-paced game with the weather and I think when we did keep possession, we could have done better going forward instead of going backward,” said STLFC Head Coach Steve Trittschuh. “But credit to the guys, it’s the same thing as last week in Louisville, they are putting their mind to not giving up goals and that we’re going to win the game. If we can keep progressing on the soccer side, I think we’re going to be pretty good.” 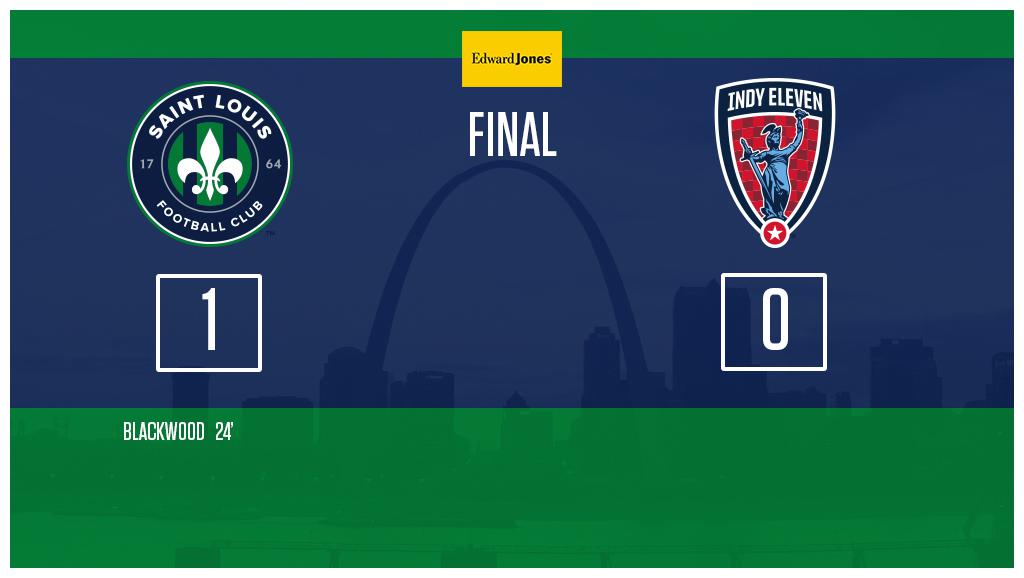