MEMPHIS, Tn. – Saint Louis FC fell 1-0 on the road against Memphis 901 FC at AutoZone Park in Match 5 of the USL Championship regular season.

Memphis scored the lone goal in the 54th minute as Mark Segbers crossed the ball to Keanu Marsh-Brown in the box for a close-range finish. The result sees Saint Louis FC fall to 3-2-0 with 9 points in Group E while Memphis 901 FC improves to 1-2-2 with 5 points in Group G.

The first half was a mostly even affair but Memphis 901 FC would create the first chance in the 15th minute as Phanuel Kavita was forced to clear an effort from Marsh-Brown off the line. STLFC would respond through Kadeem Dacres as he took a shot from distance that was caught by Memphis goalkeeper Tim Howard in the 22nd minute. The away side would continue to put pressure on the former USMNT goalkeeper as Tyler Blackwood hit a sweet volley from outside the box that was palmed away in the 25th minute. The final chance of the half would fall to Russell Cicerone with a header from the penalty spot that was collected by Howard in the 27th minute to see both sides level at the break.

The second half saw Memphis break the deadlock in the 54th minute as St. Louis-native Segbers got to the end line and pulled his cross back for Marsh-Brown to finish from inside the six-yard box. There would be added drama in the 60th minute as Kavita was adjudged to have fouled Segbers in the box for a penalty kick but STLFC goalkeeper Kyle Morton made a smart save on the spot kick from Brandon Allen to keep the deficit at one goal. Saint Louis FC would make three substitutions and change their system as they tried to get back into the game but Memphis would hold on for their first clean sheet and win of the season.

“I told them from the beginning that this would be the most difficult game so far this season and I wasn’t wrong,” said STLFC Head Coach Steve Trittschuh. “I feel we did not play a bad game but we needed to bring more energy and quality to our play. I hope the guys look at this game and get a fire under them to take into the Wednesday game at home.” 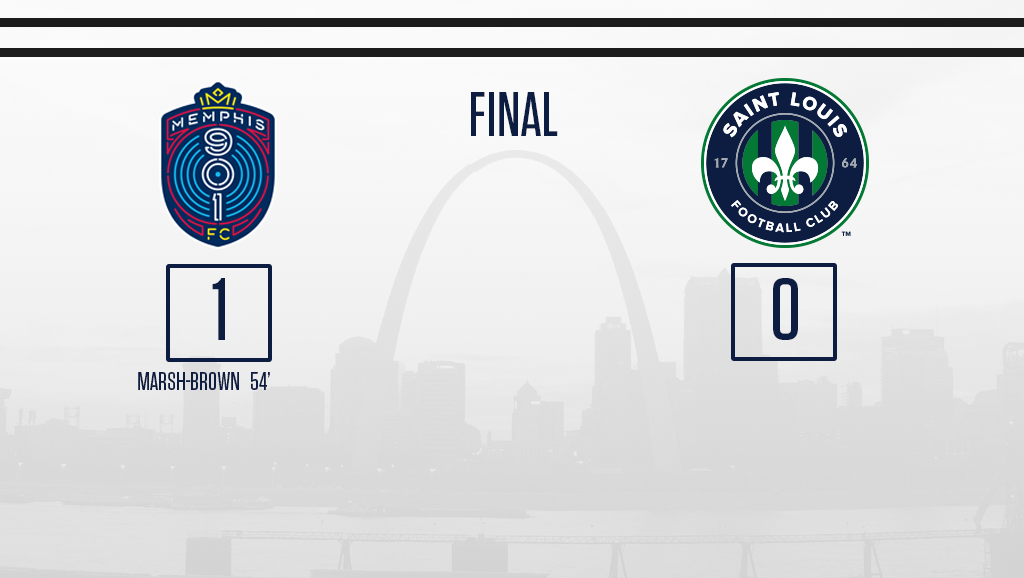