Sporting KC II opened the scoring shortly after halftime with Enoch Mushagalusa turning in a rebound at the far post in the 56th minute. With stoppage time almost over, Saint Louis FC would level it from a corner kick as Phanuel Kavita fired home a rebound in the box to earn the draw and crucial point in a tightening Group E. The result sees Saint Louis FC move to 3-2-1 with 10 points while Sporting KC II moves to 2-3-1 with 7 points in Group E.

The first half did not see many chances created for either team as Saint Louis FC maintained a majority of the possession while Sporting KC II attacked on the counter. The away side would have a great chance to open the scoring in the 17th minute as Mushagalusa had a one-on-one breakaway with STLFC goalkeeper John Berner but the St. Louis native stood strong to make the save. The only chance for the home side would come in the 30th minute from a free kick as the ball landed for Wal Fall to hit on the volley but his effort went over the crossbar and both sides entered the break level at 0-0.

The second half was a more open affair and Tyler Blackwood nearly made it three goals in four games as he latched onto a long clearance following an SKC II free kick but his shot dipped over the goal on the breakaway in the 50th minute. Sporting KC II would respond with a goal soon afterwards as Wilson Harris burst down the left and had his near post shot saved by Berner but the rebound would fall kindly to Mushagalusa at the back post to finish for his first goal of the season. STLFC Head Coach Steve Trittschuh would make all five of his substitutions to get back into the game and the home side piled on the pressure to get an equalizer. With seconds remaining in stoppage time, substitute Kadeem Dacres took the corner kick which was headed on by Berner and followed up by Kyle Greig, but it would be Kavita to finish it as his shot ricocheted off the post and in for his first goal of the season.

“Everything is decent up to a point, we just can’t figure it out in the final third right now,” said Trittschuh. “I feel that was one of our better first halves. We controlled the game, they couldn’t figure us out with the way we were set up, so to come away with a point is a little disappointing. It’s great for the fans to see that comeback, but for me, three points is what we should have got tonight.” 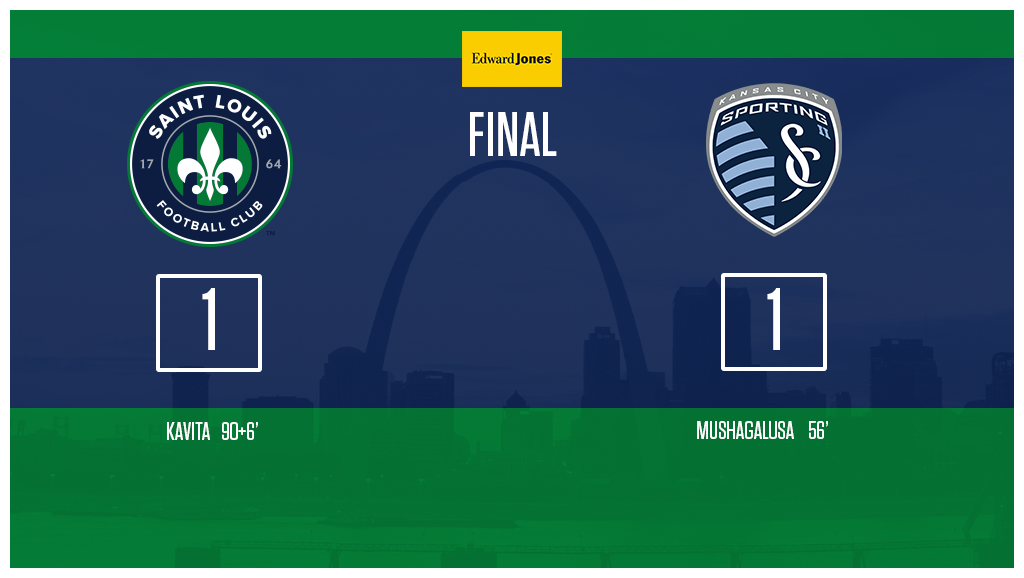