Sporting KC II broke the deadlock shortly after halftime as Wilson Harris pounced on a defensive turnover and slotted past STLFC goalkeeper Kyle Morton in the 47th minute. Saint Louis FC would respond with two quick goals courtesy of Kyle Greig and Tyler Blackwood to take the lead before adding the third from substitute Kadeem Dacres in the 83rd minute. Sporting KC II would get a late goal from the penalty spot that was converted by Harris but STLFC would hold on to claim the win and all three points. The result sees Saint Louis FC improve to 5-3-3 with 18 points while Sporting KC II falls to 4-6-1 with 13 points in Group E.

The first half saw Saint Louis FC dominate possession and create most of the chances but they were unfortunate not to score early. Joaquin Rivas had a great opportunity in the 11th minute as he latched onto a through ball from Todd Wharton but his shot was saved by SKC goalkeeper John Pulskamp. The next opportunity would come for Richard Bryan as he dribbled past a few defenders but lost his balance in the box and his shot trickled just wide in the 20th minute. Blackwood would then have a couple of opportunities as he got on the end of crosses inside the box but his shots could not find the target and both sides would enter the break level at 0-0.

The second half saw Sporting KC II capitalize on the home side’s inability to finish in the first half as Harris dispossessed Wharton following a miscommunication in defense and finish past Morton for his sixth goal of the season. STLFC would respond immediately, however, as Wharton whipped in a free kick that bounced for Greig to slide in and bury into the top corner in the 54th minute. They would then take the lead in the 58th minute as Wharton once again played the pass that unlocked the defense for Blackwood to hold off his man and wait for Pulskamp to commit before slotting it past him for his fourth goal of the season. Saint Louis FC would add the icing on the cake in the 83rd minute as Dacres ran onto a headed pass from Greig to find himself one-on-one with Pulskamp and he calmly finished by passing it into the net. The game would have a nervy finish as Sporting KC II was awarded a penalty in stoppage time that was converted by Harris, but the home side was able to withstand the late pressure and come out with the win.

“It was a tremendous first half, I think we did everything right but put the ball in the back of the net,” said STLFC Head Coach Steve Trittschuh. “It was one of those games I thought, ‘Here we go again,’ because if we got those goals I think it would have been over earlier. Credit to the guys, they fought through a tough night and we’ll take the win and three points and go on.” 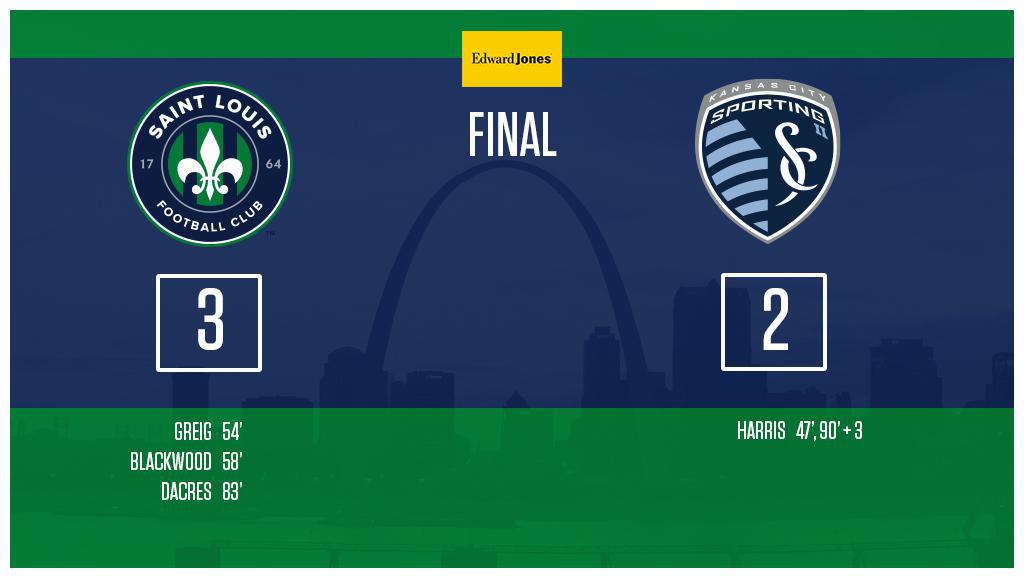