Louisville City would quickly tally two goals with Antoine Hoppenot and Cameron Lancaster both finding the back of the net in the first half. Substitute Jason Johnson would then add the third goal with virtually the last kick of the game to see Saint Louis FC fall to 5-4-3 with 18 points while Louisville City FC moves to the top of Group E with a 7-3-2 record and 23 points.

The first half saw Louisville City FC control a majority of possession with Lancaster having the first opportunity from a free kick in the 14th minute that flew over the crossbar. Hoppenot would then nearly open the scoring in the 23rd minute as he was played behind the defense but Phanuel Kavita was able to recover and block the shot. Hoppenot would not be denied soon after, however, as Devon “Speedy” Williams slipped a pass over the defense for him to hit on the volley past STLFC goalkeeper Kyle Morton in the 28th minute. The best chance for the away side would come from a free kick on the edge of the box that was taken by Wal Fall, but Louisville goalkeeper Benjamin Lundt would make the save at the near post in the 41st minute. Louisville would then respond with their second goal of the night as Lancaster received the ball at the penalty spot from Hoppenot and calmly finish in the top corner in the 44th minute to take the 2-0 advantage into the break.

The second half saw Saint Louis FC make changes early and it would be substitute Kadeem Dacres to get the first chance as he burst onto a through ball from Russell Cicerone but his shot would find the side netting in the 59th minute. Morton was then called to make a clutch save in the 61st minute as Napo Matsoso received a low cross in the box and ripped a shot that was palmed over the bar. Saint Louis FC changed their formation with the substitutions and it nearly paid dividends in the 87th minute as Cicerone received a great pass from Tyler Blackwood to find himself one-on-one with Lundt but his shot was fired over the crossbar. Louisville would then add a goal in stoppage time as Johnson finished Brian Ownby’s cross first-time to see the game finish at 3-0 and propel the home side to the top of Group E with four games remaining in the season.

“I can say that this is the first time this season that we didn’t show up to play,” said STLFC Head Coach Steve Trittschuh. “Not sure if the pressure of the season is getting to us or everything surrounding the team. We need to put this behind us and start preparing for our final four games. We need to show more determination and will to win next week against Sporting KC II.” 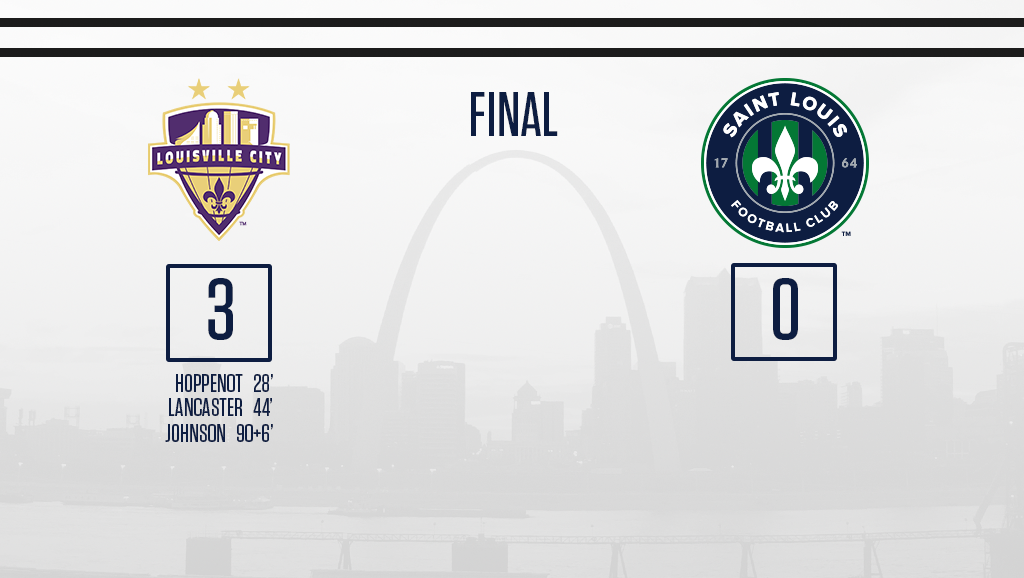