Saint Louis FC got off to a fast start as Tyler Blackwood opened the scoring in the 12th minute before Russell Cicerone added a second just before halftime to take a 2-0 lead into the break. However, Sporting KC II would storm back in the second half with goals from Petar Cuic and Isaiah LeFlore to level the game in the 86th minute. With seconds remaining in stoppage time, Todd Wharton’s free kick found Sam Fink in the box and his header flew into the back of the net to claim the victory and all three points. The result sees Saint Louis FC improve to 6-4-3 with 21 points while Sporting KC II falls to 4-8-1 with 13 points in Group E.

The first half saw Saint Louis FC on the front foot as Coach Steve Trittschuh fielded an attacking lineup in a must-win game. The first chance would come in the 4th minute as Wal Fall stepped up to take a free kick on the edge of the box but his shot was saved by SKC goalkeeper Remi Prieur. The home side would get on the scoresheet soon after, however, as Blackwood hit a first-time volley into the bottom corner from Paris Gee’s knockdown header in the box for his fifth goal of the season in the 12th minute. Sporting KC II would respond with a counter in the 28th minute that required a strong save from STLFC goalkeeper John Berner to deny Tyler Freemon. Saint Louis FC would then double their lead as Fink played a long ball to Cicerone in space on the left and he cut inside two defenders before curling his shot into the bottom corner in the 43rd minute to lead 2-0 at halftime.

The second half saw the tables turn as Sporting KC II pressed to exploit the space created by Saint Louis FC’s attacking formation. They would soon get a goal back as Dillon Serna found Cuic in the box following a defensive clearance and he slotted the ball into the bottom corner in the 59th minute. Just as Saint Louis FC was looking to make a couple of defensive substitutions to see out the game, Sporting KC II would grab the equalizer as a miscued defensive clearance from a free kick fell kindly to substitution LaFlore to score his first professional goal in the 86th minute. With Saint Louis FC looking down and out in the must-win game for the playoff positions, Todd Wharton stepped up to take a free kick on the left side of the box and his whipped cross found Fink in the center for his first goal this season to claim the win and a crucial three points in Group E.

“We’re making it hard on ourselves, really in the first half it should have been done,” said STLFC Head Coach Steve Trittschuh. “We talked about it at halftime that these guys aren’t going to stop playing and we just couldn’t string passes together and hold on to the ball. But, we’re still alive and that’s all we can ask for. It’s a good win, I wish fans were here to see this, but we’ll take the win and now we move on to Indy [Eleven] on Wednesday.” 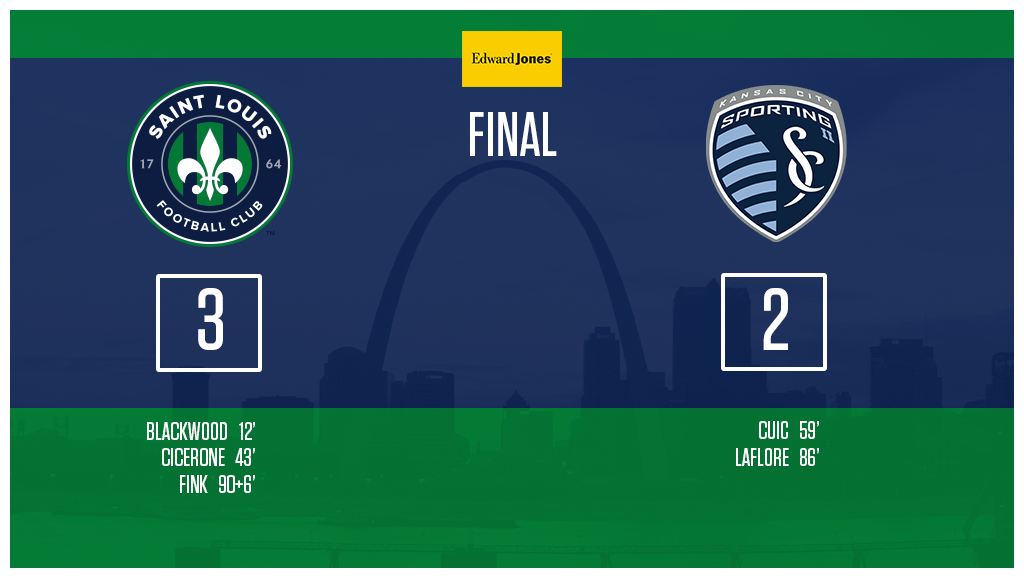