STLFC Holds On For 1-1 Draw Against Indy Eleven

INDIANAPOLIS, In. – Saint Louis FC would hold on with nine men to claim a 1-1 draw against Indy Eleven and stay alive in the 2020 USL Championship Playoffs hunt in Match 14 of the regular season.

Saint Louis FC opened the scoring shortly after halftime as Russell Cicerone slotted into the bottom corner in the 50th minute. Indy Eleven would respond in the 72nd minute as Neveal Hackshaw rose highest from a corner kick to head in the equalizer. Saint Louis FC would have two players sent off after they received second yellow cards, but they held out in the franchise’s final regular season road game to secure a crucial point. The result sees Saint Louis FC move to 6-4-4 with 22 points while Indy Eleven remains ahead in the Group E standings with a 7-5-2 record and 23 points.

The first half saw Indy Eleven control most of the possession and take shots from distance while Saint Louis FC looked to attack on the counter. The first chances for Indy would arrive in the 6th minute as both Carl Haworth and Ayoze fired shots from outside the box that were collected by STLFC goalkeeper Kyle Morton. Saint Louis FC would respond with a charging run from Cicerone in the 12th minute, but his attempted curling shot would fly just wide of the far post. Morton was then called to make two more stops before halftime as Cameron Lindley tried to power one into the near post in the 41st minute before catching Tyler Pasher’s similar attempt in the 44th minute to keep the score level at 0-0 at the break.

The second half saw Saint Louis FC break the deadlock with a beautiful pass from Wal Fall to Tyler Blackwood who held up the ball and found Cicerone running at the top of the penalty area for him to lash into the bottom corner for his fifth goal of the season. Blackwood then nearly doubled the score in the 57th minute as he hit Cicerone’s cross on the volley but his shot curved wide. The game would then turn as Sam Fink received a second yellow card in the 60th minute to put Saint Louis FC down to ten men. Indy Eleven would take advantage and strike from a quickly taken corner in the 72nd minute that was crossed in for Hackshaw to head past Morton for his second goal against Saint Louis FC this season. It would go from bad to worse for the away side as Todd Wharton picked up a second yellow card in the 74th minute to force Saint Louis FC to finish the game with only nine men. Despite one-way traffic and numerous opportunities for Indy Eleven, the Saint Louis FC team would remain strong and see out the draw to split the points heading into the final two games of the regular season.

“We are still alive,” said STLFC Head Coach Steve Trittschuh. “All credit to the players, they dug in and got the result even though a lot of circumstances were against them. It shows the quality of their characters, both the people and players, that they are.” 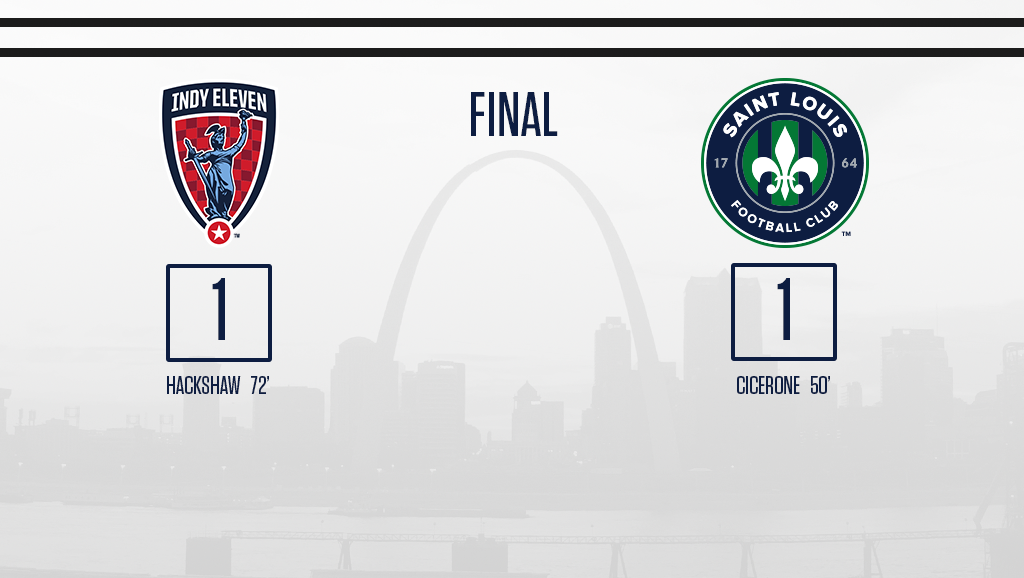