Louisville City scored the lone goal from a corner kick in the 43rd minute as Devon “Speedy” Williams was left unmarked at the back post to head in his fourth goal of the season. The defeat sees Saint Louis FC fall to 6-5-4 and remain on 22 points while Louisville City FC improves to 10-3-2 with 32 points in Group E. The result means Saint Louis FC needs Indy Eleven to lose or draw on Wednesday night against Sporting KC II to set up a season finale showdown for the final playoff position in Group E next Saturday.

The first half saw Saint Louis FC create a majority of the chances even though the possession stats favored Louisville. The home side would create the first chance in the 11th minute as Joaquin Rivas burst down the left side but his shot at the near post was saved by Louisville goalkeeper Benjamin Lundt. The next chance would arrive in the 26th minute from a corner kick as the ball ricocheted around the penalty area before bouncing to Guy Abend, but his shot from outside the box flew over the crossbar. Against the run of play, Louisville would break the deadlock from a corner kick as Oscar Jimenez hit in a looping cross to find Williams at the back post for an easy finish after losing his defender in the 43rd minute to take the 1-0 lead into halftime.

The second half was more of the same as Louisville controlled the tempo of the game while Saint Louis FC looked to attack on the counter. They would nearly find the equalizer in the 63rd minute as Kadeem Dacres latched onto a through ball from Abend but his low shot was smothered by Lundt. STLFC Head Coach Steve Trittschuh would bring on more attackers as the home side pressed for an equalizer but could not find the breakthrough as Louisville City held on for the win.

“It’s frustrating, I think that was probably the best game we’ve played this year,” said Trittschuh. “To come off our third game this week—and most of the guys played those three games—to have the energy and quality we had is frustrating to not put the ball in the back of the net. Credit to the guys, they absolutely played their butts off tonight and left everything on the field.” 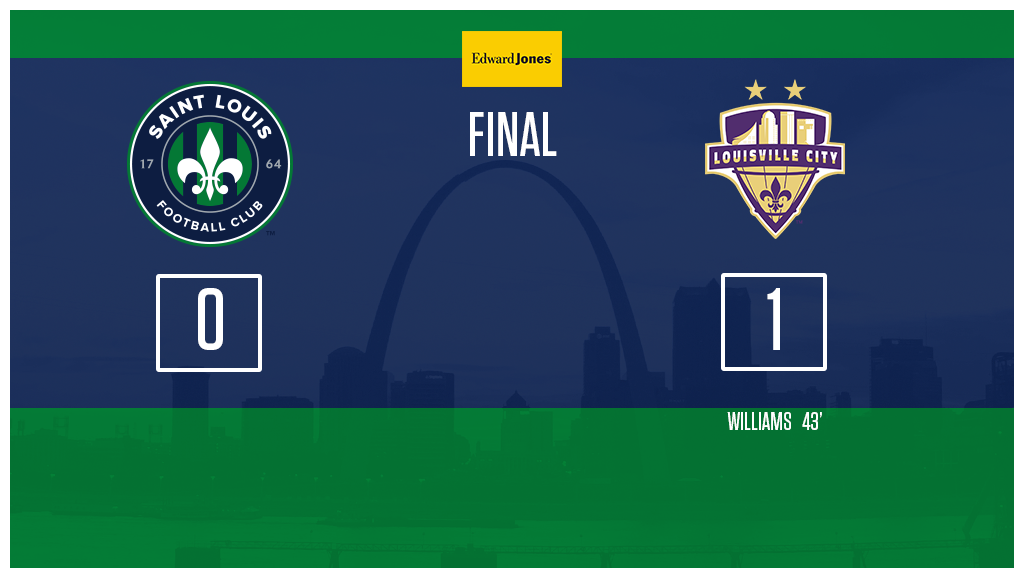