Saint Louis FC scored the opening goal in the 35th minute as Tyler Blackwood latched onto a deflected clearance and calmly slotted underneath Indy goalkeeper Evan Newton for his sixth goal of the season. They would double their lead shortly after halftime as Wal Fall converted from the penalty spot following a handball in the box. Indy Eleven would score in the 82nd minute from their own penalty kick taken by Ilijia Ilic, but Saint Louis FC would hold out to claim the victory and book the club’s second-ever appearance in the USL Playoffs.

The first half saw very little threatening chances for either side as the game started frantically with Saint Louis FC needing a win while Indy would have progressed to the playoffs with either a draw or win. It would be the home side to break the deadlock as Kyle Greig closed down Neveal Hackshaw and his deflected clearance fell kindly for Blackwood to run onto and coolly finish past Newton to take a 1-0 advantage into the break.

Saint Louis FC would quickly get a second goal to calm the nerves following a handball in the box and Fall would step up to convert the penalty in the 47th minute for his second goal of the season. Indy Eleven would set up a tense finale as they earned a penalty in the 82nd minute which was converted by Ilic, but they could not find the equalizer as Saint Louis FC stood resolute to claim the win and all three points to make the playoffs.

“I thought the guys left it all on the field and that’s all I could ask of them,” said STLFC Head Coach Steve Trittschuh. “I really had a good feeling about this game, and I’ve said before that if this team could make the playoffs, we have a good chance of doing something special. I don’t think we’re finished by far right now.” 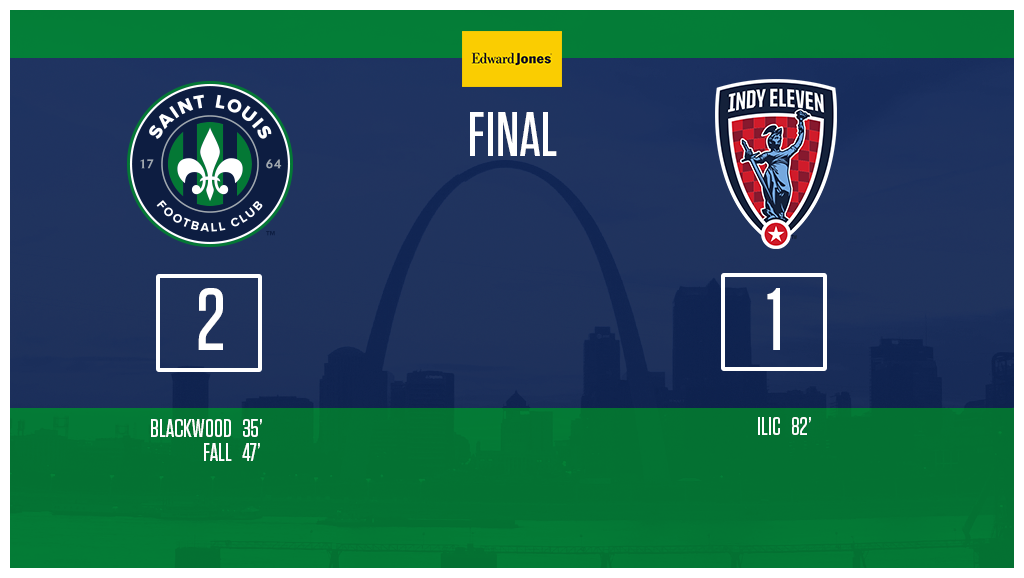