LOUISVILLE, Ky. – Saint Louis FC fell 2-0 away to Louisville City FC in the USL Championship Playoffs Eastern Conference Semifinals to see their 2020 season, and the club’s competitive existence, come to an end.

Louisville City FC opened the scoring in the 18th minute as Cameron Lancaster held his run at the back post to receive a cross from Antoine Hoppenot and finish on the volley for his 12th goal of the season. They would double their advantage in the 83rd minute as STLFC defender Tobi Adewole unfortunately headed a free kick from close range into the back of the net. The result sees Louisville City FC advance in the USL Championship Playoffs and they will host Tampa Bay Rowdies in the Eastern Conference Finals next Saturday.

The first half started favorably for Saint Louis FC as Tyler Blackwood had an early opportunity in the 8th minute but his volley following a throw-in was saved by Louisville goalkeeper Benjamin Lundt. The next chance would then be created by Blackwood as he was brought down in the box for a penalty kick, but the ensuing effort taken by Wal Fall was saved by Lundt in the 12th minute. Louisville would then respond with the opening goal as Lancaster cushioned the cross from Hoppenot on his chest and buried the volley past STLFC goalkeeper Kyle Morton in the 18th minute. Saint Louis FC then appeared to immediately equalize in the 21st minute as Sam Fink headed home a free kick swung in by Todd Wharton, but the goal was chalked off for offside. Morton was then called into action in the 28th minute to deny a shot from Hoppenot before calmly catching a dangerous shot from Corben Bone in the 39th minute. Saint Louis FC would have a late flurry from set pieces as Adewole hit the crossbar from a corner kick routine, but Louisville would hold onto the 1-0 advantage heading into the break.

The second half saw Saint Louis FC come out pressing for an equalizer and they nearly got it in the 56th minute as Paris Gee played a beautiful ball to Todd Wharton running unopposed at the back post but his shot was smothered by Lundt. Morton then made another spectacular save in the 79th minute to deny Bone from outside the box and keep the deficit at one goal. However, Louisville would get their second in the 83rd minute as Paolo DelPiccolo swung in a free kick from the edge of the box that was headed into the back of the net by Adewole. Saint Louis FC would continue to press for a goal and fight until the end, but they could not make the breakthrough as the final whistle blew to end their season.

“I want to thank the organization and the fans for a tremendous season,” said STLFC Head Coach Steve Trittschuh. “The players were a thrill to work with and they performed on the field. The support of this club and the support of the fans will always be a great memory. Thank you, STLFC!” 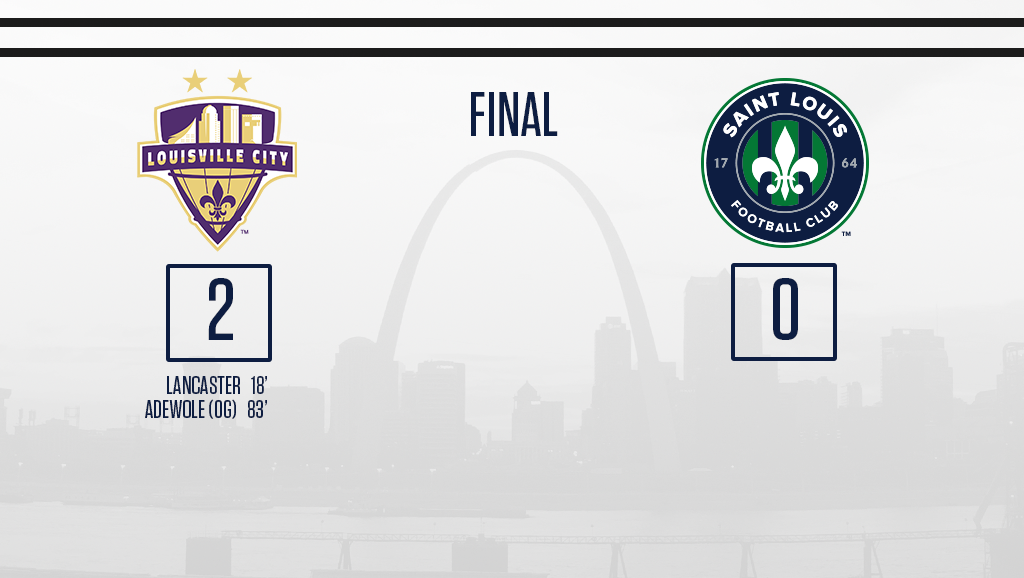