Saint Louis FC opened the scoring in the 4th minute through Kyle Greig and STLFC goalkeeper Jake Fenlason made a number of late saves to preserve the lead and claim all three points in the club’s home opener.

The first half started with STLFC on the front foot and they nearly opened the scoring within the first minute as Austin Martz found Greig with a cross at the near post which was cleared for a corner.  Greig would get on the scoresheet in the 4th minute as he ran onto a through ball from Lewis Hilton and deftly chipped the onrushing Colorado Springs goalkeeper just inside the box.  Saint Louis FC controlled the remainder of the first half with 53% possession to take the lead into the break.

The second half saw both teams make a number of substitutions to change the game and Colorado Springs nearly grabbed the equalizer when Kyle Culbertson’s header back to Fenlason came up short and Saeed Robinson latched onto the opportunity and was denied by a last-ditch tackle from Sean Reynolds.  Fenlason then came up with a massive save to earn the win after Tobanna Uzo had an open header in the 90th minute to see Saint Louis FC improve to 1-1-1 on the season.

“It was fantastic to experience the atmosphere tonight and I’m delighted for everyone involved with the club,” said STLFC Head Coach Anthony Pulis. “In patches I thought we were good, in patches not so good.  I would have liked to press for another goal as there seemed be goals available, and the decision-making in the middle of the field needs to get better, but I’ll take the shutout and win and look forward to the next game against Fresno FC.” 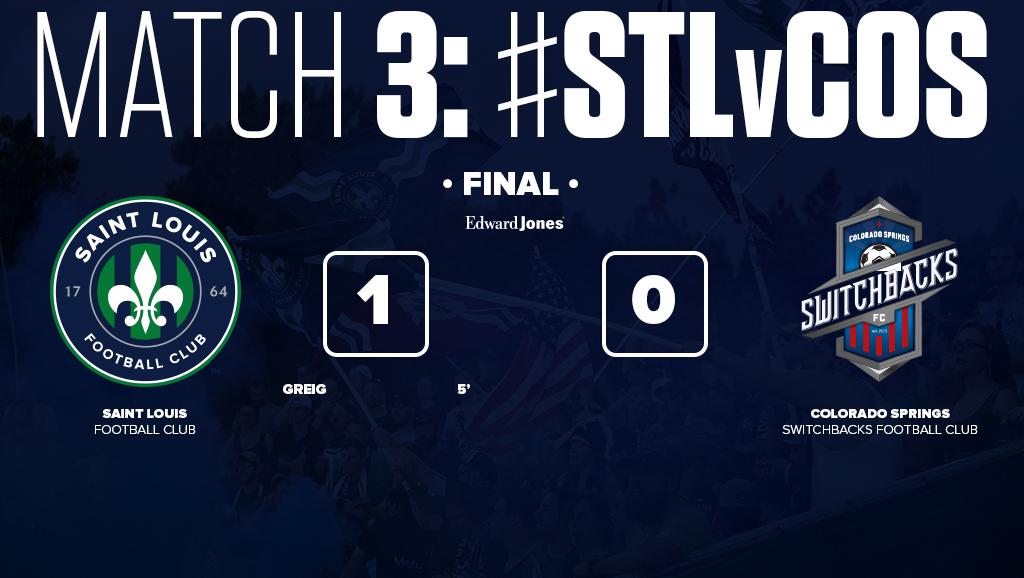