IRVINE, Ca. – Saint Louis FC drew 1-1 away to Orange County SC in front of 3,209 fans at Champions Soccer Stadium in Week 10 of the USL regular season.

Orange County got on the scoresheet first in the 78th minute as a free kick took a deflection off Phanual Kavita for an own goal.  Saint Louis FC would respond immediately through Lewis Hilton as his shot found the top corner to earn the draw and improve to 3-2-5 with 14 points in the USL Western Conference.

The first half saw Orange County come out with a majority of possession but they struggled to create chances with only one shot during that spell.  STLFC grew into the game and had a great chance to open the scoring in the 20th minute when Sam Fink headed the ball down for Albert Dikwa to volley but his effort was blocked out for a corner.  The away side would have five corners during the first half and nearly scored in the 25th minute as team leading-scorer Kyle Greig headed over the bar.  Greig was on the end of the next chance in the 35th minute as Kyle Culbertson crossed the ball low in the box but his first-time effort would go wide to see both teams level at the halftime break.

The second half was more open and the first chance fell to Saint Louis as Culbertson took a shot that hit the side-netting in the 50th minute.  Orange County reestablished possession in the middle of the half and STLFC goalkeeper Tomas Gomez was forced into his first save of the season from a Noah Powder shot in the 67th minute.  The home side would then score in the 78th minute from a free kick as Kavita tried to head it away but the ball nestled in the net for an own goal.  However, Saint Louis FC would answer with a goal from Hilton as he struck substitute Kadeem Dacres’ layoff pass first-time into the top corner.  STLFC would finish the game with 10-men as captain Jonathan Barden was shown a straight red in the final minutes but they would hold on to earn the point.

"I thought the first half was the best we’ve performed on the road this year and we were unlucky not to go into the locker room ahead," said STLFC Head Coach Anthony Pulis.  "The second half fatigue set in but I’m extremely proud of the players for the character they showed to bounce back from going a goal down and earning an important road point against one of the so-called better teams in the league." 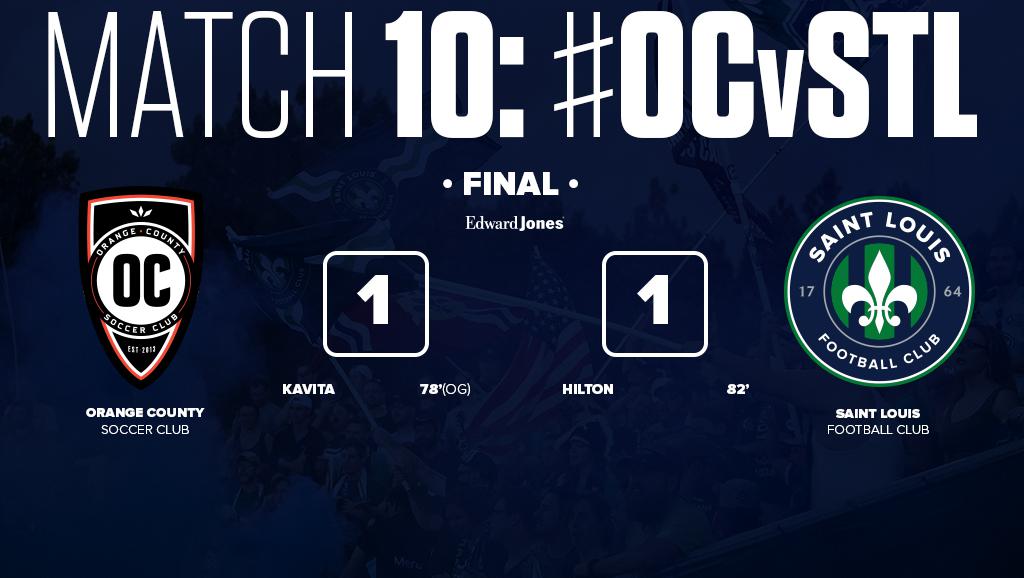