STLFC opened the scoring from the penalty spot as Albert Dikwa was fouled in the box and Corey Hertzog stepped up to bury the kick for his second goal of the season in the 26th minute.  The home side would then double their advantage in the 77th minute through Joey Calistri to improve to 4-4-5 with 17 points in the USL Western Conference.

The first half saw Saint Louis FC dominate possession and create a number of chances from set piece situations.  In the 21st minute, Kyle Culbertson found Calistri at the back post but his effort was cleared from the goal line and Culbertson’s follow-up was cleared as well.  Dikwa was then played over the top of the defense and brought down to earn the penalty kick which Hertzog dispatched low into the left corner in the 26th minute.  Swope Park pressed for an equalizer during the remainder of the half but STLFC goalkeeper Tomas Gomez would stand tall to maintain the 1-0 lead going into halftime.

The second half was similar to the first as STLFC created the most chances while Swope looked to establish possession.  The home side countered in the 58th minute as Calistri found space down the right and his cross found Dikwa at the back post but he fired his shot over the open goal.  Hertzog had a similar chance to get on a Calistri cross but his effort crashed off the post in the 65th minute.  Swope would have their comeback chances reduced in the 69th minute as Bryam Rebellon picked up a second yellow card to be dismissed from the game and force the away side to finish with ten men.  STLFC would take advantage in the 77th minute as Calistri got on the end of a Kyle Greig knockdown to fire past Swope goalkeeper Adrian Zendejas for his second goal of the season and the home side would see out the victory to improve to 2-1-1 at Toyota Stadium.

“I think everyone responded well and I knew we had a good group of players and that we had a good mentality within the group,” said STLFC Head Coach Anthony Pulis. “With the difficult and frustrating results—sometimes you have spells as a football club with ups and downs—we have gone through some adversity earlier than we would have liked but we came through it with a fantastic performance. I’m extremely delighted for everyone at the club—the players, the staff, the fans—and now it’s important we kick on from here.” 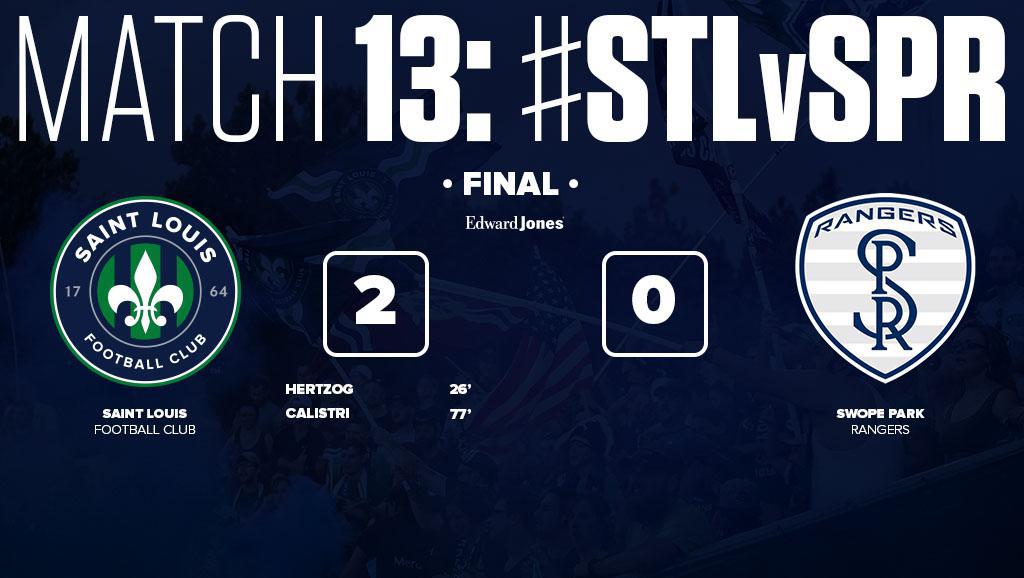